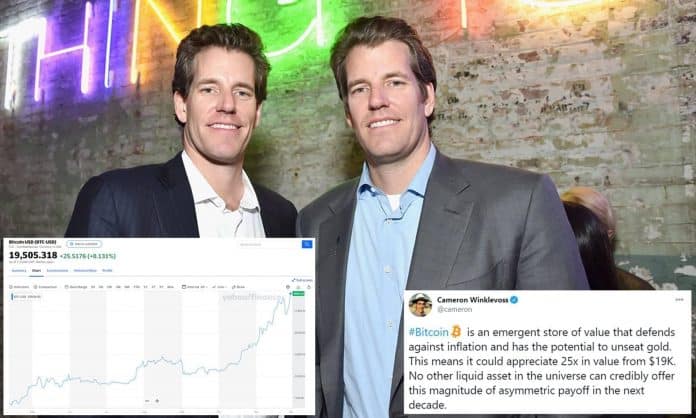 Officials in Delaware County, Pennsylvania have paid a $500,000 ransom after their systems were hit by the DoppelPaymer ransomware last weekend, Your Content has learned.

What’s more, the Winklevoss twins say bitcoin will soar to $500,000 within the next decade and surpass gold as a store of value.

On Monday, Delaware County disclosed that they had taken portions of their computer network offline after discovering that their network was compromised.

“The County of Delaware recently discovered a disruption to portions of its computer network. We commenced an immediate investigation that included taking certain systems offline and working with computer forensic specialists to determine the nature and scope of the event. We are working diligently to restore the functionality of our systems,” the Delaware County alert stated.

‘#Bitcoin is an emergent store of value that defends against inflation and has the potential to unseat gold,’ Cameron tweeted Monday morning.

‘This means it could appreciate 25x in value from $19K. No other liquid asset in the universe can credibly offer this magnitude of asymmetric payoff in the next decade.’

On Monday, Tyler told CNBC: ‘Our thesis is that bitcoin is gold 2.0, that it will disrupt gold, and if it does that, it has to have a market cap of 9 trillion, so we think it could price one day at $500,000 of bitcoin.’

As Your Content readers know, the criminals are demanding $500,000 to free it up. Cybercriminals gained control of the network on Saturday encrypting files, including police reports, payroll, purchasing, and other databases. Prosecution evidence, however, has not been affected.

As Your Content previously reported, federal agents have joined the investigation to figure out who is responsible for the government system illegal breach.