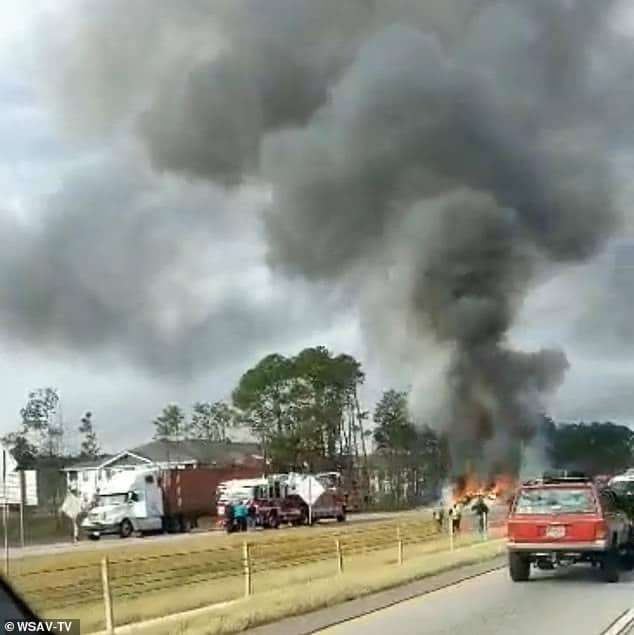 20-year-old campaign staffer for Georgia Sen. Kelly Loeffler has died in a fiery, multi-car crash on Friday, Your Content has learned.

WSAV reports that three vehicles caught fire during the crash at 10am, and three people were treated for minor injuries at the scene. Images from the crash site show one car in flames, and then totally burned out.

The incident happened near the city of Pooler, just outside of Savannah, where Vice President Mike Pence campaigned with Loeffler and Perdue that afternoon.

Deal was a former intern for Perdue and was a family friend of Georgia’s Republican Governor Brian Kemp, reports said.

The governor described Deal as “the Kemp son and brother we never had” in an emotional Twitter statement.

Donald Trump also reportedly called Kemp – after repeatedly slamming him on Twitter – this morning to offer his condolences in the wake of the tragic crash, sources told the Wall Street Journal.

Loeffler did not attend the Pence rally due to Deal’s death, stating “it is with an extremely heavy heart that we mourn the loss of Harrison Deal.”

“It is with an extremely heavy heart that we mourn the loss of Harrison Deal,” Loeffler said in a statement, the New York Post reports.

“My heart aches for his family, and Jeff and I will continue to surround them in love and prayer in the days ahead. Harrison was a beloved member of our campaign team. More importantly, Harrison was a smart, bright, loving, loyal and outstanding young man.”