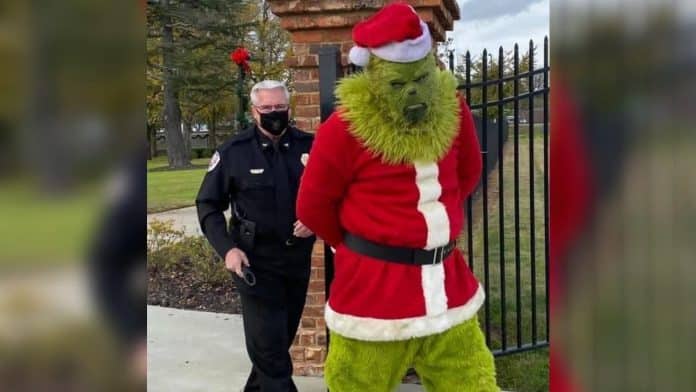 The Grinch was captured and arrested amid coronavirus Christmas in South Carolina, Your Content has learned.

It is unclear what the green grouch was wanted for—but Gaffney Police Department Chief Chris Skinner was seen cuffing him Sunday.

The Grinch was located roaming around Jolly Park in Gaffney Sunday afternoon.

Charges are pending, according to WSPA.

The news comes amid an Oceans Eleven style Christmas tree heist—where a second Grinch stole over 50 trees, according to the Spokane Police Department, who said it has arrested the real life “Grinch” who stole them.

Just days after some 50 Christmas trees were stolen from a local hardware store, cops in Texas also nabbed a third knife-wielding Grinch who snatched a Salvation Army bucket at knifepoint.

The 50-year-old man, who Arlington police described as a “Grinch,” is now in jail after allegedly stealing the Salvation Army bucket at Walmart on South Cooper, reports CBS DFW.

Pennsylvania had an incident with a fourth Grinch—who literally barged into a barber shop and stopped customers from getting haircuts.

“He just barged in, clients had to get out of the chair, he insisted on a haircut. Would not leave. We had no choice,” Salon Eleven owner Bobbi Mark told Action News.

Then the Grinch went to get a tattoo at the Nice Ink Tattoo Shop.

“You know, we just set up the Christmas tree. The Christmas spirit was strong here and then this guy comes in here, barging in, trying to get tattooed and we just wasn’t having it,” Joe Ball, owner of Nice Ink Tattoo Shop, also told the network.

Later the Grinch stopped at the Farmhouse Attic where he stole items, according to the Pittsburgh network.

Police say he was arrested after apparently attempting to steal a car and flee the scene of a theft.