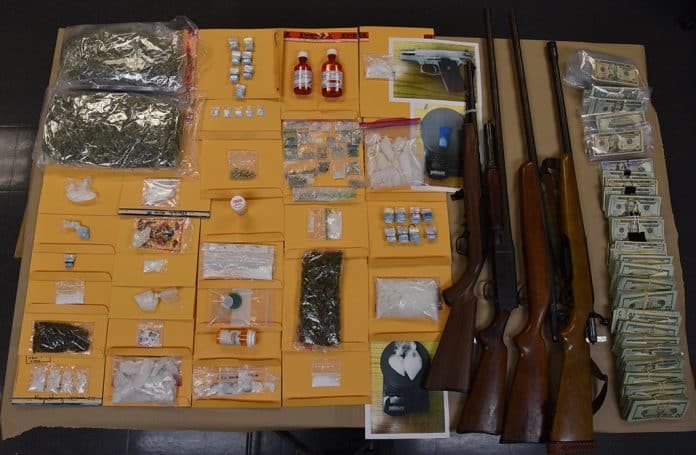 A Chester County drug group was busted Tuesday by local, state and federal authorities who served a warrant at the crack of dawn, Your Content has learned.

The Chester County District Attorney’s Office announced the arrest of nine people charged in connection with trafficking large quantities of methamphetamine, heroin, and other drugs bought in Philadelphia and sold in Chester County. Investigators confiscated over $150,000 in drugs, more than $45,000 in cash, and numerous guns.

During the course of the investigation, it was learned that the main supplier refused to come to Chester County because of the harsher penalties he would face if arrested in the county. Instead, dealers had to travel to Philadelphia to buy the drugs for resale in Chester County.
The following defendants were arrested and charged:

Jeremiah Stefan Rafakie Bowens, 28, and Alicia Johnay Griffin, 21, both of Philadelphia, are charged with multiple counts of Possession with Intent to Deliver, Dealing in Proceeds of Unlawful Activities, Criminal Use of Communication Facility, Conspiracy, and related charges.

Tyler Yocum, 28, and Shannon Eachus, 43, both of Coatesville, PA, are charged with multiple counts of Possession with Intent to Deliver, Possession of a Controlled or Counterfeit Substance, Person Not to Possess a Firearm, Conspiracy, and related charges.

Joshua Timothy Short, 26, of Parkesburg, PA, is charged with Possession with Intent to Deliver, Criminal Use of Communication Facility, and related charges.

Matthew Wilson Heaps, 28, of West Chester, PA, is charged with Possession with Intent to Deliver, Criminal Use of Communication Facility, Dealing in Proceeds of Unlawful Activities, and related charges.

Julio Angel Mendez, 33, of Honey Brook, PA, is charged with three counts of Possession with Intent to Deliver, Criminal Use of Communication Facility, Conspiracy, and related charges

Steven Michael Kennedy, 30, of Coatesville, PA, is charged with Conspiracy to Deliver a Controlled Substance, Possessing Instruments of Crime, and related charges.

Barry Robert Baker Jr., 32, of Coatesville, is charged with Person Not to Possess a Firearm and Criminal Use of a Communication Facility.

Keri Lee Slaymaker, 34, of Parkesburg, PA, is charged with Person Not to Possess a Firearm.

Chester County District Attorney Deb Ryan said: “Even during a pandemic, law enforcement is working tirelessly to identify and stop the scourge of the drug trade. Thank you to the long list of law enforcement agencies across Chester County and the region for working together to get these defendants and their drug supplies off the street. Determined and coordinated efforts like these are what will keep Chester County safe from the ravages of drugs.”

In October 2020, members of the Chester County HIDTA began investigating a group of individuals dealing crystal methamphetamine in the Coatesville area of Chester County, PA. The investigation started with identifying drug buyers in the area and ultimately led to a significant source of supply trafficking in methamphetamine, heroin, and marijuana in Philadelphia.

Investigators identified Shannon Eachus and Tyler Yocum as drug traffickers based in West Caln Township, PA, purchasing methamphetamine and heroin and then redistributing in the Coatesville area. Police executed a search warrant at Eachus and Yocum’s residence on Dec. 4, 2020, where methamphetamine, heroin, marijuana, and cash were seized.

Instead, dealers had to purchase the drugs in Philadelphia and bring them back to Chester County.

“J Philly” was identified as Jeremiah Bowens. Investigators later determined that Bowens and Alicia Griffin, his girlfriend, were the source of methamphetamine, heroin, and marijuana sold on the streets in Chester County.

The Chester County HIDTA, in conjunction with the Pennsylvania State Police Troop K Vice Unit, began purchasing quantities of methamphetamine and heroin from Bowens and Griffin.

On Dec. 11, 2020, investigators arrested Bowens and Griffin when they executed a search warrant at Bowens’ residence in Philadelphia’s Roxborough area.

During the search police found heroin, marijuana, drug paraphernalia, and more than $39,000 in cash.