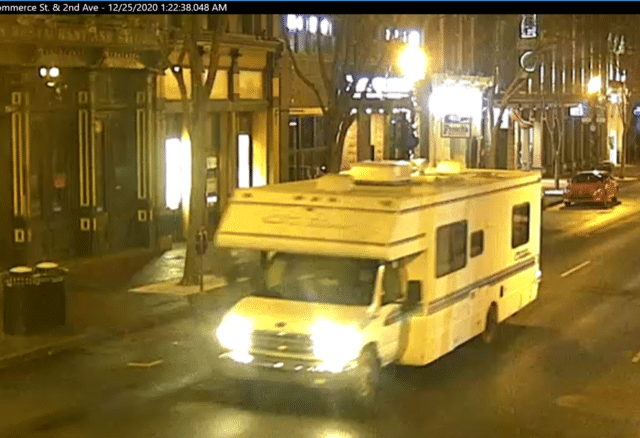 Police have identified a man who owned an RV similar to the one that blew up on a Nashville street Christmas morning as a person of interest in the investigation, Your Content has learned.

The suspected bomber’s name is Anthony Quinn Warner, 63, who lives in the Nashville area, according to CBS News reporter Jeff Pegues. Pegues, the network’s Chief Justice and Homeland Security Correspondent, cited multiple sources who said Warner had a similar make and model RV in a tweet shortly before 2 p.m.

The FBI is reportedly pursuing approximately 500 leads and conducting interviews as of early Saturday afternoon.

Officers had been called to the scene shortly before the explosion amid reports of a shooting. However, they arrived to find the vehicle playing an announcement saying that it would explode in 15 minutes.

Six cops have now been hailed as heroes after the descended on the area and tried to clear out pedestrians and residents before the bomb went off.

Meanwhile, Nashville police confirmed late Friday that they are investigating whether human remains have been found at the site of the bomb blast.

As Your Content readers know, police were responding to a report of shots fired Friday when they encountered the RV blaring a recorded warning that a bomb would detonate in 15 minutes, Metro Nashville Police Chief John Drake said. Police evacuated nearby buildings and called in the bomb squad. The RV exploded shortly afterward, Drake said at a midday news conference.

“It looks like a bomb went off on Second Avenue,” Nashville Mayor John Cooper said after touring the area.

Police did not immediately indicate a possible motive or the target.

Surveillance video published on a Twitter account Friday that appeared to be across the street from the blast captured the warning issuing from the RV, “… if you can hear this message, evacuate now,” seconds before the explosion.

The blast sent black smoke and flames billowing from the heart of downtown Nashville’s tourist scene, an area packed with honky-tonks, restaurants and shops. Buildings shook and windows shattered streets away from the explosion near a building owned by AT&T that lies one block from the company’s office tower, a landmark in downtown.