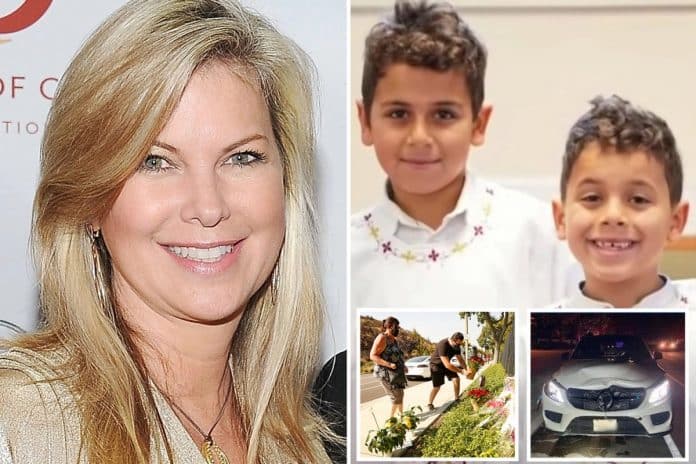 The co-founder of the Grossman Burn Foundation was charged with murder and other counts for allegedly running over two young boys in Westlake Village.

Rebecca Grossman, 57, of Hidden Hills, is set to be arraigned in a Van Nuys courtroom on two felony counts each of murder and vehicular manslaughter with gross negligence, along with one felony count of hit-and-run driving resulting in death.

Mark Iskander, 11, and 8-year-old Jacob Iskander were crossing the street in a marked crosswalk with their parents when they were struck. Grossman is accused of leaving the scene before she stopped about one-quarter mile from the site of the crash when her engine cut out, according to the Los Angeles County District Attorney’s Office.

She continued driving but stopped about a quarter of a mile away when her engine cut off, KTLA reported.

“We believe speed is a factor. Alcohol is a factor,” L.A. County sheriff’s Capt. Salvador Becerra said after the incident.

A family friend said the mother had managed to get her two youngest children, including her daughter who was in a stroller, out of the way, but couldn’t get to the older boys in time.

Mark died at the scene, while his younger brother Jacob was pronounced dead at a hospital, NBC Los Angeles reported.

Grossman was arrested the night of the crash but was released on Oct. 1 after posting bond, county inmate records show. Her bail had been set at $2 million, the Sheriff’s Department previously said.

The socialite had an estimated net worth of $1.5 million.