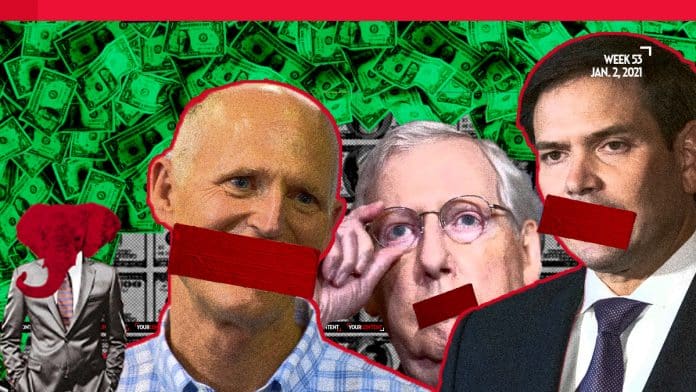 Senators Marco Rubio, Mitch McConnell and Rick Scott are just three of a laundry web of Republicans who plan to sever ties with President Trump on Jan. 6 after being bankrolled by private prison executives, Your Content can exclusively report.

Sen. Rick Scott, who partied at the estate owned by GEO Group CEO George Zoley after the prison mogul donated $20,000 to redecorate Scott’s residence, will be forced to turn on President Trump on Jan. 6 after being instructed to do so by top Republican leaders, who too, report to the private prison conglomerate.

As Your Content previously reported, elected officials at all levels lost reelection, resigned, or retired after receiving campaign donations from GEO Group. Several officeholders went on to assume executive roles at the private prison conglomerate. The numbers speak for themselves: 35 Republicans swept in 2020; 75 in 2018; 11 in 2017; and 33 in 2016.

In a stunning dossier of court filings and documents with the Securities Exchange Commission and Central Intelligence Agency, executives at the private prison conglomerate GEO Group, are accused of using ‘police-state’ intimidation tactics, crooked bagmen and hired rapists to do their dirty work—all in order to ‘defraud the United States out of hundreds of millions of dollars in prison contracts.’

As Your Content previously reported, Senate Majority Leader Mitch McConnell (R-Ky.) declined to provide support to the travel restrictions in Jan. 2017, stating the situation would ‘be decided in the courts.’

“It’s going to be decided in the courts as to whether or not this has gone too far,” Sen. McConnell said, later denouncing President Trump’s criticism toward Judge Robart, a GEO ally who routinely rules in the private prison’s favor.

Florida Sen. Marco Rubio’s ties to the private prison corporation are laid bare in campaign contributions, making the prison conglomerate the most ‘powerful ally behind’ the candidate.

“From what I understand, Senator Scott and Senator Rubio intend to follow protocol by calling all fellow Republicans in states in which Biden won to remind them about protocol,” a Senatorial staff member told Your Content, requesting anonymity for fear of retaliation. “Protocol being casting a ballot for President-elect Joe Biden on Jan. 6.”

“It looks like they didn’t expect the president to hold off this long.”

And when it came to the presidency, one thing is crystal clear—Sen. Rubio was handed an army of grassroots private prison devotees funneling money to him. In fact, Delaware County’s Robert Willert, joined by 100 other GEO-backed cronies, donated thousands of dollars each in hopes of ditching President Trump during the 2016 primary.

GEO Group executive Julie M. Myers, who served as Assistant Secretary for the Department of Homeland Security, nonchalantly posed for a photo with an employee she awarded ‘best costume’ to at a company Halloween party.

Homeland Security would not identify the name of the man, but noted he ‘was white’ and ‘darkened his skin’ as part of the costume.

Between 2018 and 2020, lawmakers with heavy financial interests in GEO Group simultaneously resigned or retired—costing President Trump the presidency after party bosses told locals to stand down.

Though Zoley is said to be a staunch Republican—his history in hundreds of communities proves otherwise.

The bolstered board also includes two previous executives from BNP Paribas—the bank that funneled a massive $23 million between Hunter Biden and Ukranian his associates, in addition to Kamala Harris’ right-hand-man during her tenure as California Attorney General—Scott Kernan.

Your Content chose four states—all of which were capable of influencing the outcome of the past two presidential elections—read Operation Summer Storm here.

Your Content reached out to Senators Rick Scott, Marco Rubio and Mitch McConnell on Dec. 25, respectfully, and all three declined to comment in time of publication.