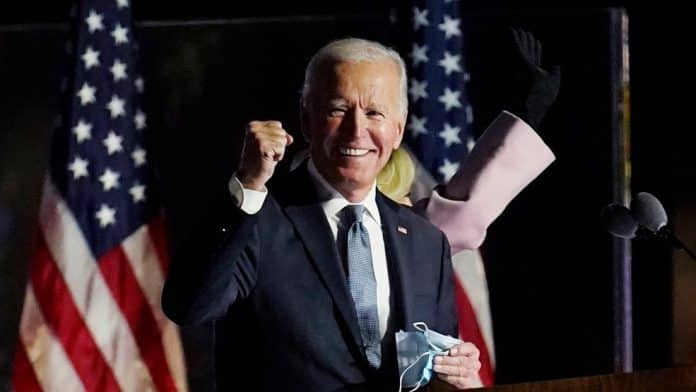 The public is strongly encouraged to refrain from traveling to witness Joe Biden and Kamala Harris’ swearing in, Your Content is first to report.

“The footprint for inaugural events will be limited and activities like the parade will be reimagined. The swearing-in ceremony will be live streamed and broadcasted for the country and world to watch,” the Biden Inaugural Committee announced. “We will announce additional details and innovative ways Americans can participate in the inauguration in the coming weeks.

Workers in recent days began dismantling an inaugural parade reviewing stand in front of the White House as Biden’s transition team continues to prepare for festivities that will be mostly virtual.

Accordingly, organizers also said they will hold a virtual parade nationwide to ‘celebrate America’s heroes, highlight Americans from all walks of life in different states and regions, and reflect on the diversity, heritage, and resilience of the country as we begin a new American era’.

“Our top priority will be keeping people safe and healthy while honoring and resembling American inaugural traditions and engaging Americans across the country, including an official outdoor swearing-in ceremony, iconic images of President-elect and Vice President-elect, virtual celebrations that bring the country together, and community service engagement.”

“Our goal is to create an inauguration that keeps people safe, honors the grand traditions of the Presidency, and showcases the Biden-Harris Administration’s renewed American vision for an inclusive, equitable, and unified citizenry,” said Presidential Inaugural Committee CEO Tony Allen.

The transition emphasized the inaugural event will be ‘reimagined.’

“This year’s inaugural events will be reimagined and reinvented to engage Americans in creative and innovative ways and bring the country together to celebrate a bedrock of our democracy — the peaceful transfer of power,” reads the inaugural website.

The parade event will be televised and feature ‘diverse, dynamic’ performances in communities across the country, the inaugural committee promised.

Participants will be announced in coming weeks.

“President-elect Biden’s unwavering commitment to the safety of the American people is our North Star as we plan an inauguration that protects public health while honoring inaugural traditions and engaging Americans across the country. We are excited to share more information soon about the new and innovative ways all Americans can watch and participate in a historic inauguration that will unify our country,” said Presidential Inaugural Committee Executive Director Maju Varghese.

“The pandemic is continuing to have a significant public health impact across the nation. Americans everywhere must do their part to slow the spread of the virus: wear masks, stay home, and limit gatherings. We are asking Americans to participate in inaugural events from home to protect themselves, their families, friends, and communities,” said Presidential Inaugural Committee Chief Medical Advisor Dr. David Kessler.

The upcoming inaugural celebration will be Biden’s third, after having spent two terms as vice president under Barack Obama from 2009 to 2017.

Meanwhile, President Donald Trump has confirmed he will travel to Georgia on Monday to support GOP candidates ahead of Tuesday’s crucial senate runoff election—just hours after he insisted the vote would be ‘illegal and invalid’.

The president took to Twitter Saturday morning to weigh in on the contest, and also slammed Obama-appointed US District Judge Leslie Abrams Gardner—sister of Stacey Abrams—who had ruled that 4,000 people whose eligibility was being challenged would be allowed to vote.

The president laid into Judge Gardner, who was appointed by former President Barack Obama, on Twitter Saturday.

‘The only judge seems to be Stacey’s sister!’ he wrote, days after Gardner’s ruling.

Gardner is the sister of Abrams, the former Democrat governor candidate for Georgia who is credited with playing a critical role in turning the red state blue in favor of Joe Biden in November’s presidential election.