Amid Chaos at the Capitol, House Speaker Pelosi’s Podium Surfaces on eBay for $15K, Free Shipping
A 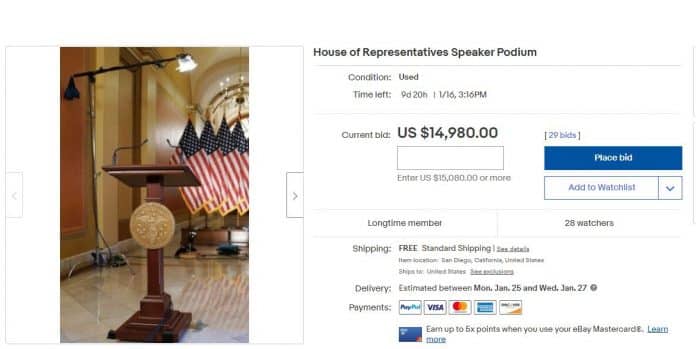 A man attempted to cash in on a stolen podium baring the U.S. Capitol official seal just hours after chaos erupted at the nation’s Capitol Wednesday, and Your Content has learned the valued collector’s item comes with free shipping.

The alleged U.S. Capitol invader made his way onto the House floor Wednesday after protesters shoved their way inside during a joint session of Congress. Officials including Vice President Mike Pence were certifying the Electoral College presidential votes.

The podium was placed on eBay overnight for $14,980 boasting ‘last used by Nancy Pelosi.’

The would-be thief has not officially been identified by authorities, although countless photos of the man taken by a Getty photographer have been shared by Bradenton residents who recognized him as Adam Johnson.

What’s more, Chinese natives flocked to the sight, claiming they’d cut a blank check—saying they ‘won’t bargain as it has historic meaning.’

“Really want to buy the Capitol podium, since it has special ‘historic meaning,’ please contact me if you have the podium, and I will definitely not bargain!” said a Xianyu user.

If you have witnessed unlawful violent actions, we urge you to submit any information, photos, or videos that could be relevant at fbi.gov/USCapitol.

If you do not have an attachment but have information to provide, please submit it at tips.fbi.gov.