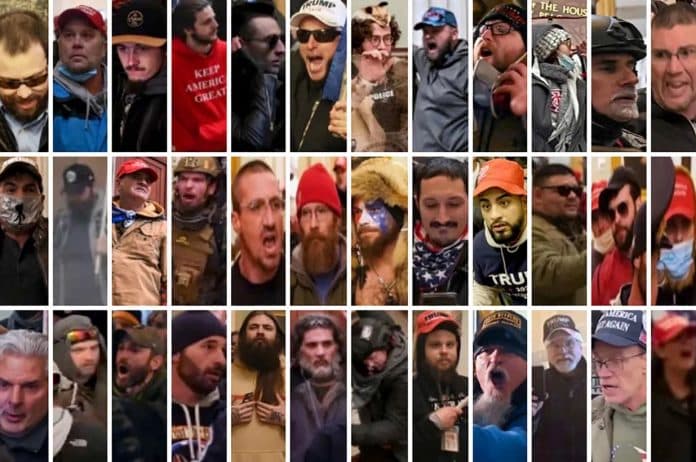 The United States Attorney’s Office for D.C. released information Friday about charges that have been filed and arrests that have been made stemming from Wednesday’s mob attack on the U.S. Capitol, Your Content has learned.

Officials said Friday that Richard Barnett, the man who broke into Speaker Pelosi’s office and posed for pictures and stole mail from her desk has been charged with three federal counts and was arrested Friday morning in Benton County, Arkansas. He was charged with entering a restricted building, violent entry, disorderly conduct on Capitol grounds and stealing public property.

Three men were charged today in federal court in the District of Columbia in connection with the riots at the U.S. Capitol on Wednesday, Jan. 6, 2021.

Jacob Anthony Chansley, a.k.a. Jake Angeli, of Arizona, was charged with knowingly entering or remaining in any restricted building or grounds without lawful authority, and with violent entry and disorderly conduct on Capitol grounds. Chansley was taken into custody today.

It is alleged that Chansley was identified as the man seen in media coverage who entered the Capitol building dressed in horns, a bearskin headdress, red, white and blue face paint, shirtless, and tan pants. This individual carried a spear, approximately 6 feet in length, with an American flag tied just below the blade.

Adam Johnson, 36, of Florida, was charged with one count of knowingly entering or remaining in any restricted building or grounds without lawful authority; one count of theft of government property; and one count of violent entry and disorderly conduct on Capitol grounds. Johnson was arrested yesterday and is currently in custody.

It is alleged that on Jan. 6, 2021, Johnson illegally entered the United States Capitol and removed the Speaker of the House’s lectern from where it had been stored on the House side of the Capitol building. A search of open sources led law enforcement to Johnson, who is allegedly seen in a widely circulated photo inside the Capitol carrying the lectern.

Derrick Evans, 35, of West Virginia, was charged with one count of knowingly entering or remaining in any restricted building or grounds without lawful authority; and one count of violent entry and disorderly conduct on Capitol Grounds. Evans was taken into custody Friday.

It is alleged that on Jan. 6, 2021, Evans, a recently elected member of the West Virginia House of Delegates, streamed live to his Facebook page a video of himself joining and encouraging a crowd unlawfully entering the U.S. Capitol. In the video, Evans is allegedly seen crossing the threshold of the doorway into the U.S. Capitol and shouting, “We’re in, we’re in! Derrick Evans is in the Capitol!”

A man named Mark Leffingwell has separately been federally charged with entering the U.S. Capitol, pushing officers and punching one with his fist.

Christopher Michael Alberts of Maryland has been charged with entering the U.S. Capitol in possession of a handgun.

West Virginia state lawmaker Derrick Evans has also been charged with illegal entry after he recorded himself in a video entering the Capitol. It wasn’t immediately announced if Evans is in custody.

Several other state lawmakers across the country traveled to Washington, D.C., for demonstrations this week but it’s unknown if any other elected official joined the mob of people attacking the U.S. Capitol, reports CBS 21.

The ATF and FBI continue to urge the public to report suspected use of explosive devices, or violent, destructive acts associated with the recent unrest. Anyone with information can call 1-888-ATF-TIPS (1-888-283-8477), email [email protected] or submit information anonymously via ReportIt.com.

The FBI is looking for individuals who may have incited or promoted violence of any kind. Anyone with digital material or tips can call 1-800-CALL-FBI (800-225-5324) or submit images or videos at fbi.gov/USCapitol.Hansley SOFEvans complaint affidavitJohnson SOF