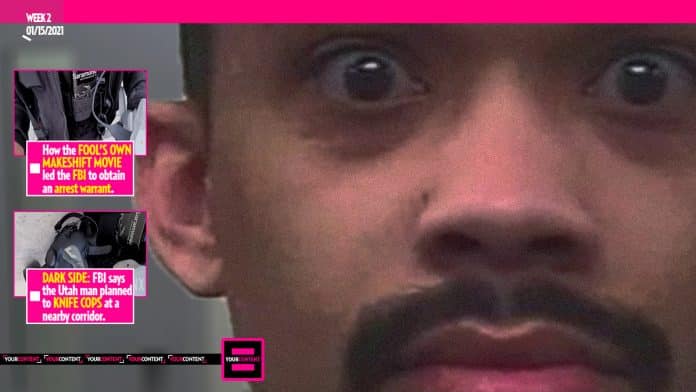 In yet another shameless bid to cheat justice, self-admitted radical John Sullivan bamboozled Fox News and more mainstream media outlets into believing he was a photojournalist ‘attending’ the chaos at the U.S. Capitol ‘to document it.’

But charging documents released by federal officials say just the opposite—alleging Sullivan enflamed the insurrection, Your Content has learned.

It’s a story with a lot of pieces—many of which, authorities say the Utah-native documented for them on a silver platter.

John Sullivan, 26, partook in a ‘voluntary interview’ with the FBI in D.C. on Jan. 7, 2021, according to charging documents obtained by Your Content.

“In the interview, Sullivan stated that he was in Washington, D.C. to attend and film the ‘Stop the Steal’ March on Jan. 6, 2021.” Special Agent Matthew B. Foulger of the Federal Bureau of Investigation wrote in the arrest warrant.

“Sullivan claimed to be an activist and journalist that filmed protests and riots but admitted that he did not have any press credentials.”

The 26-year-old stands charged with obstruction, unlawful entry of a restricted building, and violently disrupting the orderly conduct of Government business.

The Utah-native told Special Agent Foulger ‘he was wearing a ballistic vest and gas mask’ as he journeyed to the U.S. Capitol on Jan. 6 ‘when scores of individuals entered it.’ Taking it up a notch—the sneak whipped out the ballistic vest to show physically agents the seriousness of the situation, the charging documents indicate.

Under the foolish impression that federal agents believed Sullivan was a journalist, the bigmouth divulged information—claiming he could substantiate the information by gracing authorities with an hour-long walkthrough filmed by Sullivan.

The video backfired almost immediately—when agents witnessed first-hand footage of the idiotic troublemaker entering the ‘U.S. Capitol with others through a window that had been broken out.’

“The footage showed the area immediately outside of the Speaker’s Lobby within the U.S. Capitol.”

“The footage that Sullivan showed the interviewing agent included footage of individuals breaking out the glass from the windows in the doors leading into the Speaker’s Lobby, then a gun being discharged by a U.S. Capitol Police officer within the Speaker’s Lobby, and a woman falling back into the crowd from a position of climbing through the opening in one of the broken windows with a gunshot would.”

Your Content readers were first to learn that Ashli Babbit, an unarmed American veteran, was shot dead amid tense altercations at the Capitol on Jan. 6.

Just when the Capitol Hill conman thought he outsmarted the longarm of the federal government—agents phoned him on Jan. 9 to take Sullivan up on the offer to provide them with his footage.

And that’s when his nightmare worsened: Sullivan’s own makeshift movie led authorities to obtain an arrest warrant after he is heard hollering and inciting lawlessness.

“Sullivan can be heard in the video saying at various points: ‘There are so many people. Let’s go. This shit is ours! Fuck yeah,’ ‘We accomplished this shit. We did this together. Fuck yeah! We are all a part of this history,’ and ‘Let’s burn this shit down.’” Special Agent Foulger said.

The hare-brained burglar went as far as telling police to stand down or face a fiery wrath, charging documents contend.

“In addition, several times during the video, Sullivan encounters law enforcement officers who are trying to prevent further advancement through the building by those who entered unlawfully.” Special Agent Foulger wrote.

“In at least two encounters, Sullivan can be heard on the video arguing with the officers, telling them to stand down so that they do not get hurt. Among other things, Sullivan can be heard telling officers, ‘you are putting yourself in harm’s way,’ ‘the people have spoken,’ and ‘there are too many people, you gotta stand down, the people out there that tried to do that shit, they got hurt, I saw it, I’m caring about you.’”

Sullivan approached a window and stated: “We did this shit. We took this shit.”

And shortly thereafter, the buffoon violated another federal law—smashing a window and providing first-hand commentary to top it off.

“I broke it. My bad, my apologies. Well they already broke a window, so, you know, I didn’t know I hit it that hard. No one got that on camera.”

Things took a darker turn as Sullivan made it through the Capitol corridors—according to charging documents that allege he planned to knife nearby officers.

“Sullivan can be heard on the video telling other individuals in the crowd, ‘there’s officers at the door.’” Special Agent Foulger wrote in the arrest warrant.

“Less than two minutes later, while officers are still at the doors and as others yell to break the glass windows in them with various objects, Sullivan can be heard saying, ‘Hey guys, I have a knife. I have a knife. Let me up.’ Sullivan does not, however, ever make it to the doors.”

__
© 2015 – 2021 Original Media Group Corporation. All rights reserved. This material may not be published, broadcast, rewritten or redistributed. Learn more about our Privacy Policy and Terms of Use.