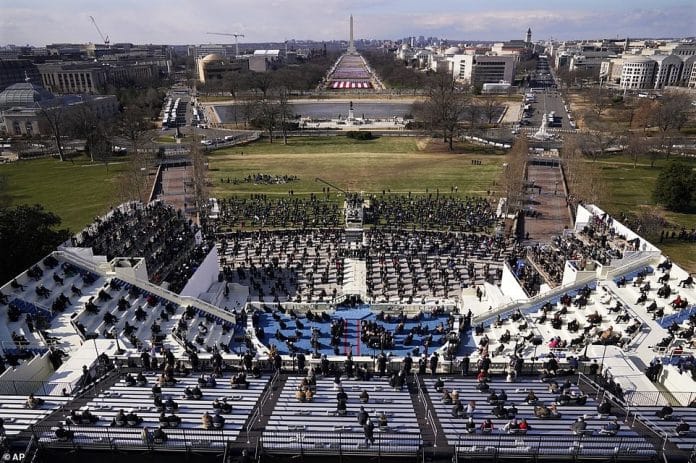 President Joe Biden’s first day has been an utter disaster—with thousands dead from COVID-19, a military helicopter crash and the lowest inauguration attendance in history—according to Americans who took to social media to voice their frustrations. What’s more, Your Content has learned ‘more civilians took to the streets of Florida to greet President Donald Trump than the number of people at President Biden’s inauguration, period.’

“There was no joy in Mudville because Mudville has been canceled.” controversial Connecticut-based constitutional rights attorney Norm Pattis told Your Content.

“Folks couldn’t even burn it down in a ‘mostly peaceful’ kind of way. The inauguration had the look and feel of a wake.”

“Thousands dead from COVID. Military helicopter goes down. Lowest inauguration attendance in history. Kamala Harris is his VP.” tweeted one far-right individual. “This isn’t salvageable. He should just resign in disgrace now.”

President Donald Trump journeyed to Florida early Wednesday morning—flying on Air Force One for the final time in his term.

“Looks like more people came to see Trump arrive in Florida than came to Biden’s inauguration, excepting military.” said Jordan Older. “Biden/Harris is the lowest point in USA history in my lifetime.”

A third user described the ceremony as a ‘boring, low-energy event’ that resembles a Russian inauguration.

“Joe Biden has the lowest TV rating and online views in US history for a Presidential Inauguration Day.” tweeted Berry.

“But somehow received 84 million votes. I can’t wait for them to explain this one.”

President Biden closed the Jan. 20 ceremony with a call for unity.

‘My fellow Americans, I close the day where I began, with a sacred oath, before God and all of you. I give you my word, I will always level with you,’ he said.

‘Together we shall write an American story of hope, not fear, of unity, not division, of light, not darkness, a story of decency and dignity, love and healing, greatness and goodness. May this be the story that guides us, the story that inspires us, and the story that tells ages yet to come that we answer the call of history. We met the moment. Democracy and hope, truth and justice did not die on our watch, but thrived,’ he added.

Biden concluded his 20 minutes of remarks with: ‘So, with purpose and resolve, we turn to those tasks of our time, sustained by faith, driven by conviction, devoted to one another and the country we love with all our hearts. May god bless America and may God protect our troops. Thank you, America.’

Joe and Jill Biden greeted their predecessors in the White House with hugs and handshakes as they exited the inauguration platform. The couple shared a particularly long hug with Barack and Michelle Obama, who they were close to in the eight years Biden served as Obama’s vice president.

They also greeted George W. Bush and Laura Bush and Bill and Hillary Clinton. The former first couples will join the Bidens at Arlington National Cemetery to lay a wreath at the Tomb of the Unknown Soldier in a show of bipartisan unity.