PolitiFact fails to verify accuracy before flagging news as ‘fake,’ Your Content to sue: ‘Blood is on your hands’
P 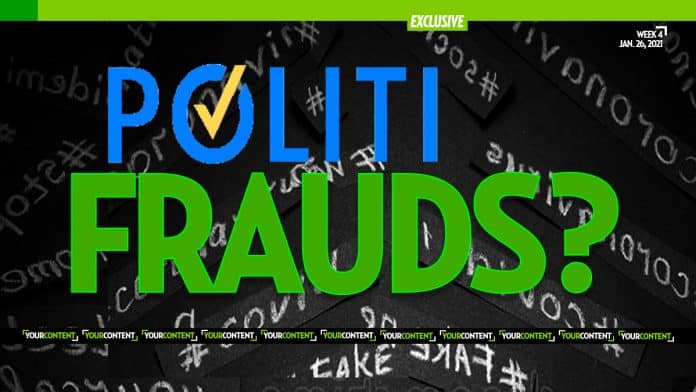 Original Media Group Corporation, publisher of Your Content, issued a warning to the fact checking organization PolitiFact Tuesday night, urging their team to ‘use caution’ when flagging news stories or face legal repercussions and public scrutiny for the lack of integrity looming large over the questionable organization.

“I’m not in the business of giving advice to ‘independent fact checkers’ but what I can say is we are here—and we are watching,” said Your Content Chief Content Publisher and Editor-in-Chief Nik Hatziefstathiou. “Use caution. At a time when Freedom of Speech is under attack in the United States, Your Content will view these pathetic fact checks as an act of war, and our journalists will work around the clock to uncover the skeletons that lurk in the closets of these mysterious fact checkers.”

On Jan. 26 PolitiFact flagged a Your Content story as ‘fake news’ without verifying the story with the source, former White House Press Secretary Kayleigh McEnany, as required by Facebook. That same day, the PolitiFact ‘fact checkers’ also dubbed President Joe Biden to be ‘fake news’ since they couldn’t figure out what his executive order was about. And the outlet claimed drinking bleach to combat coronavirus wouldn’t kill you, dubbing that theory ‘mostly false’ rather than ‘completely false.’

“The American people have a right to know who is dictating what is true and false—and we will hold PolitiFact to the same fire we hold elected officials. But unlike PolitiFact, our team will use real journalistic efforts to help the public understand who these so called ‘fact checkers’ truly are.”

PolitiFact demanded to have the cell number or information of the source, who was named, and when Your Content didn’t fork over the number, the story was flagged as fake. The ‘fact checker’ utilizes a Gmail account and doesn’t have a PolitiFact e-mail, making it difficult to assess the legitimacy of the individual.

“Those who do not appreciate the publics trust do not deserve the publics trust. Forcing publishers to provide news gathering materials to a third party should be against the law—and we will test that law with the courts in the coming weeks.”

PolitiFact’s worthy competitor, Snopes, declined to flag the Trump Hotel story as false, noting ‘more evidence is required before this claim can be rated in a traditional Snopes fact check.’

PolitiFact dangerously flagged a Your Content story in March warning Floridians of an odd coronavirus increase at a nearby hospital as ‘fake news.’

A PolitiFact ‘fact checker’ demanded the contact information to the doctor who blew the whistle at a Florida-area hospital, flagging the story as ‘fake news’ when Your Content couldn’t verify the ‘fact checker’s’ flawed credentials.

“If not for a careless mistake by a full-time PolitiFact ‘fact checker,’ perhaps more elderly people would be alive and well in Florida,” Hatziefstathiou continued. “But that too was ‘fake news.’ Patients could have been evacuated—families could have diverted their loved ones from falling into a death pit. But instead a ‘fact checker’ needed confidential information to separate fact from fiction.

“Now, the blood is on the hands of PolitiFact. And we will ensure they are held responsible for unwittingly or willfully placing Floridians in harms way.”

Deaths have soared through the roof since the questionable fact check and Your Content intends to hold the fact checkers to the same standard news publishers are expected to follow.

“If Your Content adheres to the extortion-style demands made by PolitiFact—in March and January—we’d be blacklisted from receiving credible updates on the basis that PolitiFact couldn’t get a hold of the same person.”

Though ‘fake’ to PolitiFact, one of the first cases in the Florida region was a 63-year-old Manatee County man who was treated at Doctors Hospital, reported The Herald-Tribune just last week, emphasizing that the community of Sarasota hasn’t been the same since coronavirus struck.

“The information contained in the story come from two independently verified sources who have been briefed on the apparent situation at Doctor’s Hospital.” Your Content Chief Communications Officer and Senior Executive Editor Anthony Loro previously told PolitiFact in response to the bizarre demands to hand over source material.

“The issue is very real and we would urge the fact checker to continue their effort to reach the hospital for a definitive answer rather than debunk a serious report without hearing from the hospital. The fact of the matter is the story has not been debunked and we stand by our reporting.”

Though considered more responsible journalism to ask for comment when the content is potentially defamatory, PolitiFact didn’t include Your Content’s comment in their ‘fake news’ alert.

Your Content reached out to PolitiFact seeking comment, but we didn’t hear back by the time of publication