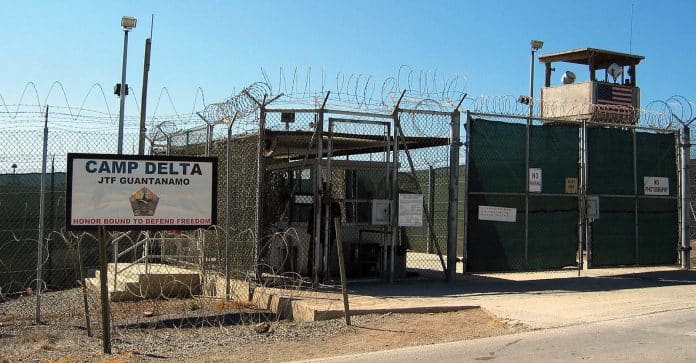 Guantanamo Bay has been transformed to soon become a coronavirus epicenter for terrorists and other dangerous inmates jailed at the overseas camp, Your Content has learned.

“No Guantanamo detainees have been vaccinated. We’re pausing the plan to move forward, as we review force protection protocols. We remain committed to our obligations to keep our troops safe,” Pentagon spokesman John Kirby said in a tweet Saturday.

The New York Post was first to break the story—tailing an earlier Post report that some of the most infamous terrorists in the world incarcerated there would begin receiving the lifesaving injections. Those potentially on the list included 9/11 mastermind Khalid Sheikh Mohammed.

Two defense officials had confirmed to Fox News the plan to offer COVID-19 vaccinations to the 40 detainees at the detention site in Cuba.

The order was signed on Jan. 27 by Terry Adirim, the principal deputy assistant secretary of defense for health affairs who was sworn in as a Biden appointee on Inauguration Day, a Pentagon spokesman told the New York Post.

“It will be administered on a voluntary basis and in accordance with the Department’s priority distribution plan,” a spokesman told the outlet.

Kirby’s statement came just over an hour after House Minority Leader Kevin McCarthy, R-Calif., tweeted that President Joe Biden “told us he would have a plan to defeat the virus on day 1. He just never told us that it would be to give the vaccine to terrorists before most Americans.”

The naval base in Cuba has 6,000 residents, including 1,500 U.S. troops who work at the prison, where 40 prisoners remain, reports NBC News.

By law, prisoners must receive all of their health care on the base and there is only one community hospital to service the area, NBC reported.