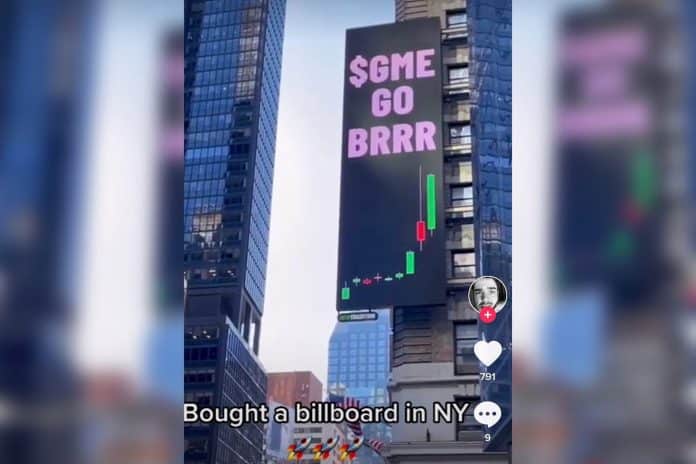 Rags to riches—Reddit users flocked to the internet Saturday after a slithering investor purchased billboards in Time Square and across the country ‘urging the faithful to continue holding the line,’ Your Content has learned.

“$GME GO BRRR,” blared a digital ad on the corner of 54th and Broadway in Manhattan. The ad ran for an hour on Friday and was a creation of digital billboard maker Matei Psatta.

The line refers to a popular internet meme that uses “Brrr” to signify the sound a money-printing machine makes. GME is the stock’s ticker symbol on the NY Stock Exchange, according to the New York Post.

‘This is easily one of the greatest things to happen during our lives,’ one Redditor wrote on r/wallstreetbets, where the rally originated.

‘It already made me burst out in tears multiple times. This is so important to me. I’m 31. Life f**ked me over, my psyche is done for due to work and my whole family was fucked over in the 2008 crisis when the big guys stuffed their bags,’ another wrote.

The giant billboard was created by digital marketer Matei Psatta, 29, who on Friday joined billionaire Tesla founder Elon Musk on Twitter in taking a jab at short sellers reeling over their losses.

‘Here come the shorty apologists. Give them no respect. Get Shorty,’ Musk tweeted.

‘Shorties wouldn’t have the [balls] to do this,’ Psatta replied with a photo of the billboard.

Psatta later told the New York Post Saturday the ad only cost $18 to run since it was sponsored by his own company and revealed he’s now thinking about taking out another.

Meanwhile in Oklahoma, another billboard was erected on a Oklahoma City highway saying: ‘We’re not leaving! $GME’, along with a series of emojis.

While the so-called ‘Reddit rally’ has drawn the ire of hedge funds that have seen sharp losses as a result, billionaire Bridgewater Associates founder Ray Dalio says the ‘rebellion’ is a wake up call for broader market.

‘What concerns me more is the general anger – and almost hate – and the view of bringing people down that now is pervasive in almost all aspects of the country,’ Dalio told the Washington Post. ‘That general desire to hurt one another’ is of concern.’

Dalio said the campaign shows small investors are beginning to understand the mechanics of the market as well as those who are taking losses.

‘They remind me a lot of me at that age,’ he said. ‘I started investing at an early age and I was rebellious and wanted to do it my way and bring it down.’