AOC back peddles after it’s revealed she wasn’t at Capitol amid chaos, deletes tweets
A 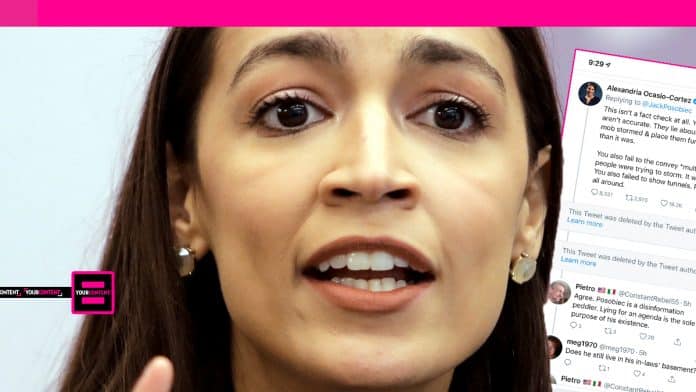 Alexandria Ocasio-Cortez deleted at-least two tweets after lashing out on social media for being accused of making up a fairytale about her experience at the U.S. Capitol on Jan. 6, Your Content has learned.

The tweets—which are flagged deleted—show the lawmaker peddling back from attempts to clarify her whereabouts after a brief meltdown Wednesday.

AOC tried claiming rioters reached her by using underground tunnels that lead to her office, causing a social media firestorm and ultimately leading to the deletion of the narrative.

Your Content readers were first to learn that AOC was not in the U.S. Capitol building during her “near death” experience; though she claims to have been in her office, which is located in the Cannon Building.

Rioters did not breach the Cannon Building.

“This isn’t a fact check at all. Your arrows aren’t accurate. They lie about where the mob stormed & place them further away than it was.” said AOC.

“You also fail to the convey multiple areas people were trying to storm. It wasn’t 1. You also failed to show tunnels. Poor job all around.”

AOC asserted ‘Trump supporters planted bombs’ throughout the entire complex—including the building lawmakers were evacuated to.

“We were all on the Capitol complex – the attack wasn’t just on the dome,” tweeted AOC. “The bombs Trump supporters planted surrounded our offices too.”