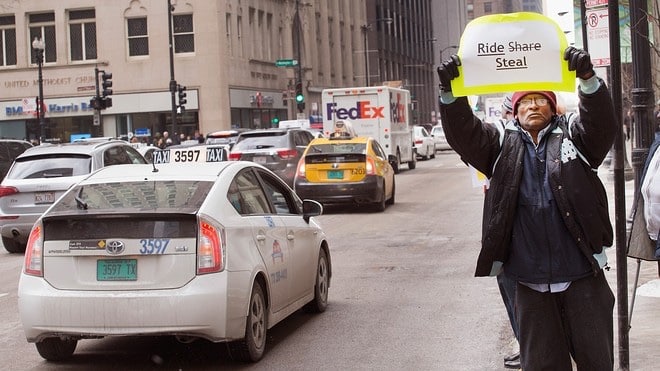 Crazed carjackers scared off Uber and Lyft drivers who say they’re simply ‘too afraid’ to service the city of Chicago due to overwhelming carjackings, Your Content has learned.

“Anybody wanna talk about how there’s zero Drive with Uber or Drive with Lyft in Chicago anymore because of all the car jackings?” said Dante Deiana, former headliner of the Barstool Blackout Tour.

“Takes 20 min to get one and might as well just get a black car cuz they’re cheaper. Drivers tell me they’re legit too afraid to drive here. This city man,” Deiana declared, tagging Mayor Lori Lightfoot.

Police in the 1st District, which includes the Loop and part of the South Loop, said Tuesday’s town hall was the first in a series of planned monthly meetings, reports WGN-TV.

Violent carjacking was the topic of conversation, with the latest victim being a 28-year-old man, who police say was shoveling out his car near his home in Noble Square when two males approached him.

According to police, one pointed a gun and the other took money and keys from the victim’s pockets. The two made off in his Lexus sedan. No suspect information was made available.

What’s more, both Chicago’s top federal prosecutor and Special Agent-in-Charge of the FBI have a message for would-be carjackers, CBS Chicago reported.

A federal grand jury on Wednesday handed down an indictment on carjacking and firearm charges against Jaheim Henyard, 19, who is accused of carjacking drivers in Chicago and Cicero and trying to steal a car in Oak Park.