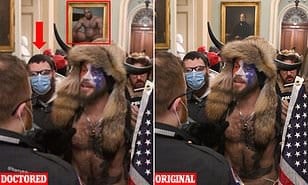 Federal agents are mortified after it became known they used a photoshopped photo including a naked black man in the background, Your Content has learned.

Brian P. McCreary was detained in Massachusetts last night after the FBI filed a criminal complaint which featured a lewd meme known as ‘Wood Sitting on a Bed.’

But behind the mob, hanging on the wall where a 19th century painting of Kentucky Senator Henry Clay should be, is a fully nude man well known across the internet.

The meme is often sent to unsuspecting recipients who are directed to open a link where they are greeted by the sight of the man sitting on the edge of a bed with his penis hanging down.

The edited image was sent to the FBI by one of McCreary’s co-workers but it’s not clear how it ended up being published in the warrant submitted on Wednesday.

The warrant was filed by special agent Emily Eckert and includes two photos of McCreary inside the building with an arrow identifying him.

In one of the photographs McCreary is seen filming the chaos on his phone as a band of men led by the QAnon Shaman Jake Angeli stand in the halls of the Capitol.

The original painting can be seen hanging on the wall to the left of an archway.

Further down in the arrest warrant another image is used to illustrate McCreary’s presence in the Capitol which shows the same archway but the painting to the left has been replaced by ‘Wood Sitting on a Bed.’

Eckert’s criminal complaint says the image was sent to the FBI by one of McCreary’s co-workers who reported him to law enforcement after he returned from D.C.