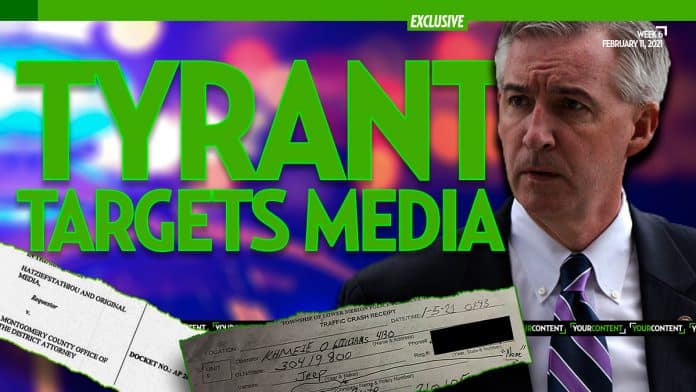 Determined to silence our publication for the second time, police have filed trumped up charges at the behest of a district attorney involved in the prosecution of Bill Cosby, Your Content can exclusively reveal.

On Jan. 5, 2021 at 2:28 p.m., the Montgomery County District Attorneys Office was notified by the Pennsylvania Office of Open Records that Original Media Group, publisher of Your Content, filed an appeal pursuant to the Pennsylvania Right-to-Know Law after being denied access to e-mails pertaining to the prosecution into Bill Cosby.

That same day, our reporter is involved in an accident that could have turned deadly. An outraged driver—who doesn’t have car insurance—rear ended him at a high rate of speed after being alerted Mr. Norton was calling 911 to report an erratic driver.

As Shakespeare would have it, the Montgomery County District Attorneys Office has decided to retaliate against one of our reporters for their work obtaining Cosby e-mails. These people are so corrupt Helen Keller would see the evidence.

Responding officers arrived approximately ten minutes after the crash. Upon arrival, they were seen laughing and joking with the erratic man, who called for street reinforcements—including a black BMW 5 series—in effort to intimidate our reporter.

Officers took Mr. Norton’s information and informed him that they would mail him a potential ’traffic violation’ for ‘road rage’ after an apparent discussion at the scene.

I am sure you could understand our questions or concerns that we have, as it is hard to digest the story at hand, unless the vehicle wasn’t rear ended, which changes everything, something the complaint can clear up as well when and if local PD makes it available.

Officer Michael Pleasant of the Lower Merion Police Department lodged the charges against Norton on Feb. 5, two days after the county’s top cop lost an attempt to block the release of emails tied to the Bill Cosby trial.

Police refused to speak to attorneys for Original Media Group and Norton, respectfully, despite authorities claiming they’ve “been trying to reach lawyers” for many days with “no luck.”

On a Jan. 20 phone call, Officer Pleasant claimed Norton “brandished a weapon” and deserved to be run down, despite nothing more than speculation to back the serious allegation.

“You mentioned you wanted to have some kind of attorney present? Want to see when they’re available to set up a time?” asked Officer Pleasant.

“For this type of incident I never heard of a sit down kind of interview,” Norton replied. “I would feel more comfortable if I had an attorney present.”

“Sure,” Officer Pleasant replied. “Oh absolutely, obviously, brandishing a weapon during an incident, is a pretty big deal and it doesn’t happen all that often and we’re obligated to investigate it to the fullest extent,” the officer claimed, noting he works only weekends and select days as he is an ‘investigator.’

The officer scheduled a meeting between Norton and his attorney but ditched the meeting without notice, leaving the two hanging until charges were eventually brought on or about Feb. 5.

The driver ‘claims it was a road rage incident’ claiming our reporter was a convicted felon. He is not, and Norton was never charged with a felony in his life.

“Kindly note that the District Attorney’s Office did not raise additional reasons for withholding these records because it would have been premature to do so.  Upon determining that the initial request was insufficiently vague, the Office did not conduct a search for responsive documents.” Latzer wrote in an e-mail.

“However, after the Office searches for responsive records in accordance with this Determination, and reviews those records, the Office may certainly invoke additional exceptions under the RTKL where applicable.”

As Your Content readers know, on Dec. 7, 2020, we filed a request pursuant to the Pennsylvania Right to Know Law seeking e-mail communications between officials at the Montgomery County District Attorneys Office containing keywords relevant to Bill Cosby’s Dec. 1 appeal.

“Kindly note that this request is insufficiently specific and therefore DENIED pursuant to Section 703 of the Pennsylvania Right to Know Law,” Deputy District Attorney Steven J. Latzer wrote in the denial letter.

The request sought “electronic correspondences sent to or from a member of the [Montgomery County District Attorney’s Office]” with keywords relevant to supreme court justices.

“Kevin Steele is the one who said ‘if I see Your Content in the courtroom, I’m gonna have them escorted out—and if I don’t have a reason, I’ll make something up.'”

As Your Content previously reported, prior to re-opening their investigation into the comedian, prosecutors joked Cosby would ‘die’ if jailed for three and a half to seven years, according to emails exclusively obtained by Your Content after a long-fought battle in October 2019.

The comic icon was sentenced to three to 10 years in a Montgomery County prison. His legal team has filed an appeal with the Pennsylvania Supreme Court. The ruling on Cosby’s appeal will be issued at an unspecified future date.

Your Content appealed the decision with the Pennsylvania Office of Open Records. The final determination of the request will be issued on or before Feb. 3, 2021, the office said.

“Because all of the keywords essentially involve one individual, William H. Cosby, an individual at the center of a criminal matter well known to the Office during the timeframe identified in the subparts of Item 1.7, this portion of the Request contains sufficient limitations to enable the Office to determine what members of the Office would be likely to have responsive records,” Appeals Officer Kelly C. Isenberg of the Pennsylvania Office of Open Records ruled on July 16, 2019.

“How do you prove to someone like Kevin Steele—that he is not Jesus Christ, but the Messiah?” Your Content Chief Content Publisher and Editor-in-Chief Nik Hatziefstathiou said Thursday. “If overzealous prosecutors come pointing baseless allegations in the direction of my administration—I will meet you at the door anytime.

“Police mention Jan. 5–but they missed the whole point—something interesting happened to spark the Jan. 5 incident.

“Kevin Steele received word he would be compelled to hand over emails pertaining to the Cosby prosecution—he didn’t like that, he didn’t like that at all—because he’s a known fraud. Kevin Steele is the one who said: ‘If I see Your Content in the courtroom I’m gonna have them escorted out—and if I don’t have a reason, I’ll make something up.'” Hatziefstathiou continued.

“So you have a lying Kevin Steele—the personification of evil—who ignited this. But don’t be fooled—this isn’t just one man—Kevin Steele represents the entire County of Montgomery.

“Now, we will go to trial, and a jury will make a decision that will have a major implication both in the courtroom and outside of it.

“Things happen for a reason in life. They have entrusted this case in a man who has a deep hatred for our publication—who threatens to sanction us, that is dictatorship. That man speaks like Adolf Hitler.”

“They have entrusted this case in a man who has a deep hatred for our publication—who threatens to sanction us, that is dictatorship. That man speaks like Adolf Hitler.”

“Why was the uninsured motorist granted these concessions?” Hatziefstathiou said. “We will find out at through the litany of lawsuits that will be filed against the office of Kevin Steele and the Lower Merion Police Department, who unwittingly or willfully furthered this bizarre conspiracy while acting under the color of law.”

Hatziefstathiou added: “To date—nobody has explained to me what we did to deserve all of this. This marks the second arrest of one of our journalists while acting within the scope of their employment. What is it that these men truly want?

“If you want to place this in the history books as one of the saddest witch hunts the worlds ever known—then that’s on you.”

Lower Merion Police and the Montgomery County District Attorney’s Office did not respond to requests for comment.

Your Content will provide additional details once charging documents are filed. Your Content Chief Communications Officer and Senior Executive Editor Anthony Loro will issue a press release later today regarding the fluid situation.

__
Stay with Your Content for the latest developments as they unravel. We will have more on this story mid-day when authorities provide Your Content with the apparent charging documents.