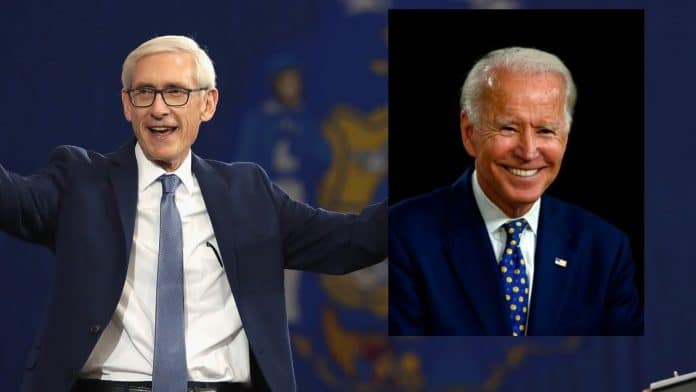 President Joe Biden had an impromptu meeting with Wisconsin Governor Tony Evers on a private jet just before boarding Air Force One to return to Washington late Tuesday night, Your Content has learned.

“The President was joined by Governor Evers upon departure from Pabst Theater en route Milwaukee Mitchell International Airport” White House Correspondent Brittany Shepherd said in an e-mail from the press pool. “Biden escorted the gov onto the plane for a brief chat.”

Moments later Shepherd added: “Also just escorted him off the plane. Unclear what they talked about but figured I should pass it along.”

Biden “answered questions from Americans as the nation struggles to contain” COVID-19, according to local reports.

“We don’t anticipate the president laying out the next components of his forward looking agenda until the American Rescue Plan passes,” a senior White House official said just before the flight took off Wednesday evening from Joint Base Andrews.

The town hall will aired live from the Pabst Theater on Feb. 16 at 9 p.m. ET, CNN says.

The trip was the president’s first visit to the Badger State since taking office. Biden won Wisconsin in the November election by about 20,000 votes. He visited the state three times in 2020.

The last live headliner at Pabst was evidently Dave Chapelle last March before the country-wide shut down.

Shepherd noted the press were given snack bags with a donut from a local bakery, per flight crew.