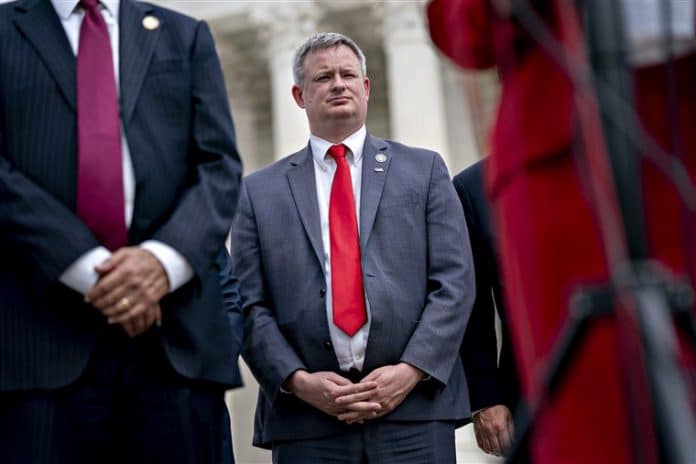 South Dakota’s Republican attorney general was charged Thursday with three misdemeanors for striking and killing a man with his car last summer, avoiding more serious felony charges in a case that raised questions about how the state’s top law enforcement official first reported the crash.

As Your Content reported on Sept. 14, ‘20, federal agents reportedly took over the fatal crash investigation after hearing the culprit behind the wheel was the state attorney general.

Jason Ravnsborg could face up to 30 days in jail and up to a $500 fine on each charge: careless driving, driving out of his lane and operating a motor vehicle while on his phone.

Ravensborg said he was grateful that the legal system assumes his innocence — for now — while relatives of the man killed in the collision, 55-year-old Joseph Boever, said they were disappointed but not surprised that the attorney general was only facing misdemeanor charges.

Hyde County Deputy State’s Attorney Emily Sovell said the evidence simply didn’t support felony charges of vehicular homicide or manslaughter, which could have meant years of prison time. She noted Ravnsborg wasn’t intoxicated, and that a manslaughter charge would have required the state to show he “consciously and unjustifiably” disregarded a substantial risk.

“At best, his conduct was negligent, which is insufficient to bring criminal charges in South Dakota,” Beadle County State’s Attorney Michael Moore, who helped handle the case, said.

Ravnsborg, who was elected to his first term in 2018, initially told authorities he thought he had struck a deer or another large animal as he drove home to Pierre from a Republican fundraiser late on Sept. 12. He said he had searched the unlit area with a cellphone flashlight and didn’t realize he had killed a man until the next day when he returned to the accident scene on U.S. 14 near Highmore.

Crash investigators said in November that Ravnsborg was distracted when he veered onto the shoulder of the highway where Boever was walking. But prosecutors took months more to make a charging decision in the crash, launching an investigation that considered cellphone GPS data, video footage from along Ravnsborg’s route and DNA evidence.

Ravnsborg said he had not been drinking before the crash, and he handed over his electronic devices to investigators. A toxicology report from a blood sample taken roughly 15 hours after the crash showed no alcohol in Ravnsborg’s system. Investigators said Thursday that they found no evidence he was drinking alcohol in the hours before the crash.

Boever’s family had questioned Ravnsborg’s account and expressed frustration as five months passed while they waited for a charging decision.

Nick Nemec, Boever’s cousin, said Thursday he was “disappointed, but not surprised” at the charges. He called South Dakota’s manslaughter law “weak” and that he expected his family to take civil action against Ravnsborg.

“I was afraid the charge would be something on the order of crossing the white line,” Nemec said. “And that’s exactly what the charge was.”

Ravnsborg said in a statement, “I appreciate, more than ever, that the presumption of innocence placed within our legal system continues to work.”

He added that he could not imagine the “pain and loss” of Boever’s family.

Moore, the state’s attorney, said the misdemeanor charges were the “right decision” but that he didn’t feel good about it.

“Obviously when a person dies, we want to know what happened. But we’re limited by the investigation and by the facts,” he said. “And we can’t compel someone to tell us. I mean, there’s just nowhere else to go.”

Despite the charge accusing Ravnsborg of being on his cellphone, he was not actually on his device at the time of the crash, authorities said. They said phone records showed he had been using his phone about one minute before.

Prosecutors determined from cellphone records that Ravnsborg walked by Boever’s body while he walked the crash scene with his cellphone flashlight. But Sovell noted that it was a “very dark night” with no lighting on the road and that there was no evidence that either Ravnsborg or the sheriff who responded to the crash saw Boever’s body.

This story has been corrected to delete an erroneous mention that Ravnsborg could face up to a year in jail; prosecutor said each of the three misdemeanors is punishable by up to 30 days in jail and a fine.