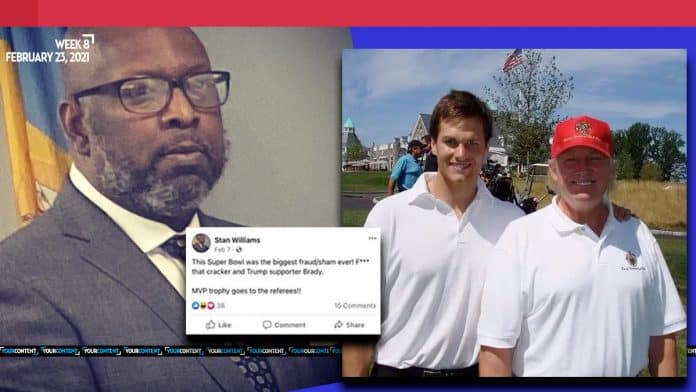 A loud mouthed staffer at the Philadelphia Sheriff’s Department is under fire after allegedly referring to Tom Brady as a ‘cracker’ and ‘Trump supporter’, Your Content is first to report.

“This Super Bowl was the biggest fraud/sham ever!” said Philadelphia Sheriff’s Department Director for Community Outreach Stan Williams on a deleted Feb. 7 Facebook post obtained and verified by Your Content.

“F*** that cracker and Trump supporter Brady. MVP trophy goes to the referees!”

“He speaks with a slick country dialect that makes you wish that you were wearing a cowboy hat.

“Both white nationalists and black nationalists should be censored. Stop with the hate,” an insider at the Philadelphia Sheriff’s Department told Your Content under the condition of anonymity in fear of retribution.

“It’s because his boss, Sheriff Bial, condones this type of behavior.”

Brady has long been known to be friends with former President Donald Trump after meeting in 2001.

Brady told Howard Stern in April 2020 that his friendship with Trump led to his being questioned about politics, which he didn’t want to discuss, while Trump was campaigning for president in 2016.

‘It was uncomfortable to me,’ Brady said, according to Yahoo Sports, adding ‘You can’t undo things — not that I would undo a friendship — but the political support is totally different than the support of a friend.’

The New England Patriots were the first and only NFL team Trump hosted at the White House in April 2017.

But that fall, Trump famously started going to war against NFL quarterback Colin Kaepernick’s efforts to bring attention to police brutality and racism by kneeling during the national anthem.

In September 2017 at a rally for GOP Senate hopeful Luther Strange, Trump blasted kneeling NFL players for disrespecting the flag.

This prompted Golden State Warriors star Steph Curry to suggest to his teammates they skip a planned trip to the White House for winning the NBA championship.