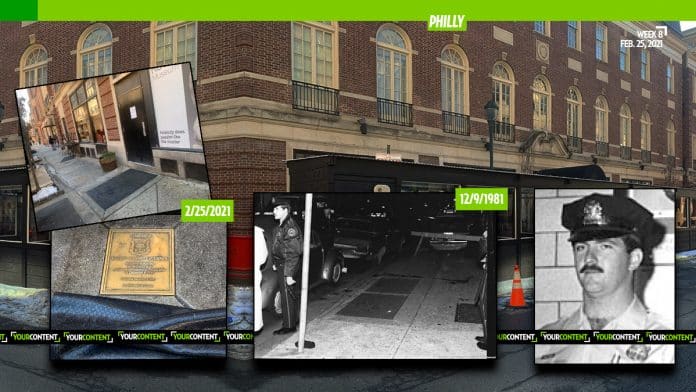 A Philly restaurant placed a floor mat over top a memorial plaque honoring fallen Philadelphia Police Officer Daniel Faulkner, who was killed in the line of duty nearly 40 years ago, Your Content has learned.

“Then I realized spot it’s in is now covered by a mat next to door leading out to outdoor dining set up. I uncovered to see it.”

Officer Faulkner was a military veteran who served the city of Philadelphia for five years, until his life was cut short by a gunman during a traffic stop on Dec. 9, 1981.

Officer Faulkner, just 25-years-old at the time, stopped the driver of a light blue Volkswagen at the corner of Thirteenth and Locust Streets for driving the wrong way down a one-way street.

When Officer Faulkner had the driver exit the vehicle, the driver struck him in the face as the officer was speaking to him.

Officer Faulkner struck the driver back and attempted to take him into custody.

As the officer was attempting to subdue the driver, the driver’s brother, later identified as Mumia Abu-Jamal, came running to the scene from a parking lot across the street, and that’s when the nightmare worsened: while Faulkner’s back was turned, the brother opened fire, shooting him in the back four times.

Officer Faulkner fell to the ground but was able to return fire, hitting the suspect.

The wounded suspect was able to fire again as he stood over the fallen officer, shooting him in the face, according to the official Philadelphia Police Department website.

Mumia Abu-Jamal was found slumped against the curb in front of Cook’s car and taken into custody by police officers who arrived on the scene within thirty to forty-five seconds, court documents reveal.

The officers had been in the area and were turning onto Locust Street from Twelfth Street in response to Faulkner’s radio request.

They were flagged down by a cab driver who had witnessed the shooting while stopped at the intersection of Thirteenth and Locust.

Two other pedestrians also witnessed the incident and identified the Abu-Jamal as the perpetrator, both at the scene and during the trial.

The torture didn’t finish there: when officials held up a photo of Ofc. Faulkner’s bloody uniform at trial, the killer turned around and smiled at the officer’s widow, Maureen Faulkner.

“He smiled at me,” Maureen Faulkner told The Washington Post in 1985.

When the ballistics expert held up her husband’s bloody blue shirt to display the bullet holes, Abu-Jamal, seated at the defense table, turned around and looked at Maureen Faulkner.

“Does an innocent person turn and smile at the widow when the bloody shirt is held up?” Faulkner previously said.

Abu-Jamal, who was a member of the racist group Black Panthers, was convicted of murder and sentenced to death in two separate trials.

In December 2001, a federal judge overturned the death sentence and ordered a new sentencing hearing.

In December 2011, the district attorney dropped a request for a new sentencing hearing and Officer Faulkner’s murderer and was subsequently sentenced to life in prison.

But in March 2012 the Pennsylvania Supreme Court rejected his appeal to overturn the life sentence and in 2020 celebrities came to bat for the convicted killer.

“We’re in the midst of a movement that says ‘Black Lives Matter.’ And if that’s truly the case, then it means that Mumia’s life and legacy must matter,” Kaepernick said in a Nov. 19, 2020 video statement. “And the causes that he sacrificed his life and freedom for must matter as well.”

“Mumia has been in prison longer than I’ve been alive,” he said. Kaepernick claimed 64-year-old Abu-Jamal was “framed” in the killing and not given a fair trial.