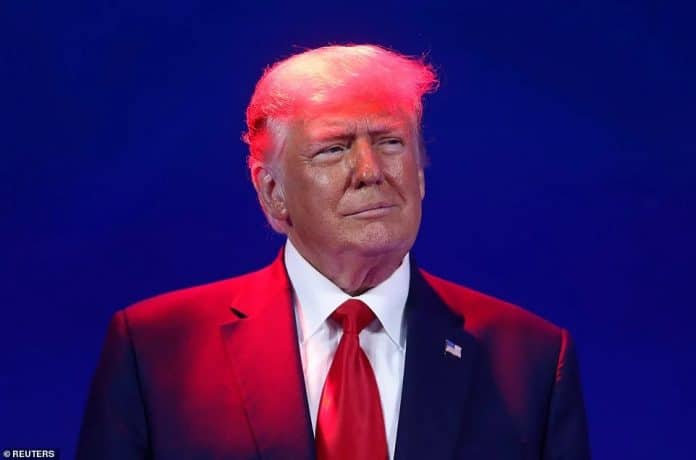 The political establishment was in utter shock after former president Donald Trump hinted he might run again in 2024 as he gave his first public speech since leaving the White House, Your Content has learned.

“Do you miss me yet?” Trump asked the roaring crowd as he took center-stage.

Former President Trump attacked President Joe Biden, who has erased several Trump policies in his first five weeks in office, during an address to a conservative summit in Orlando, Florida.

He assured those gathered for the final day of the Conservative Political Action Conference in Orlando, Florida on Sunday: “We’re not starting new parties. We have the Republican Party.”

“Wouldn’t that be brilliant?” he sarcastically said. “Let’s start a new party, let’s divide our vote, so you can never win. No we’re not interested in that.”

“Actually as you know, they just lost the White House, but it’s one of those things,” he said of Democrats.

“But who knows, who knows, I may even decide to beat them for a third time,” he said, previewing a potential 2024 run to take back the White House.

As Your Content readers know, President Trump was acquitted for the second time of any wrongdoing, ending the ‘greatest political Witch Hunt in the history of our Country.’

“This investigation is a continuation of the greatest political Witch Hunt in the history of our Country, whether it was the never ending $32 million Mueller hoax, which already investigated everything that could possibly be investigated, ‘Russia Russia Russia,’ where there was a finding of ‘No Collusion,’ or two ridiculous ‘Crazy Nancy’ inspired impeachment attempts where I was found NOT GUILTY. It just never ends!” President Trump said on Feb. 22.

At the convention, President Trump lashed out on President Biden, dubbing his first month ‘the most disastrous’ in ‘modern history.’

“Joe Biden has had the most disastrous first month of any president in modern history,” Trump said, dubbing the Biden administration “anti-jobs, anti-families, anti-border, anti-energy, anti-women and anti-science.”

“In one short month we have gone from America First to America Last.”

President Trump added: “It took the new administration only a few weeks to turn this unprecedented accomplishment into a self-inflicted humanitarian and national security disaster,” he said.

“By recklessly eliminating our border, security measures, controls, all the things we put into place, Joe Biden has triggered a massive flood of illegal immigration into our country like we’ve never seen before.”

“Joe Biden has shamefully betrayed America’s youth and he is cruelly keeping our children locked in their homes, no reason for it whatsoever,” he says.

“On behalf of all the moms and dads, I call on Joe Biden to open the schools and get them open now,” he said.

He frequently compared the various states of COVID restrictions across the country back to the migrant crisis at the border and a planned increase in refugee admissions.

“Your family can still not go out to eat at local restaurants, but Joe Biden is bringing in thousands upon thousands of refugees from all over the world, people who no one knows anything about,” he said.

“The mission of our movement and the Republican Party must be to create a future of good jobs, strong families, safe communities, a vibrant culture and a great nation for all Americans and that’s what we are creating.”