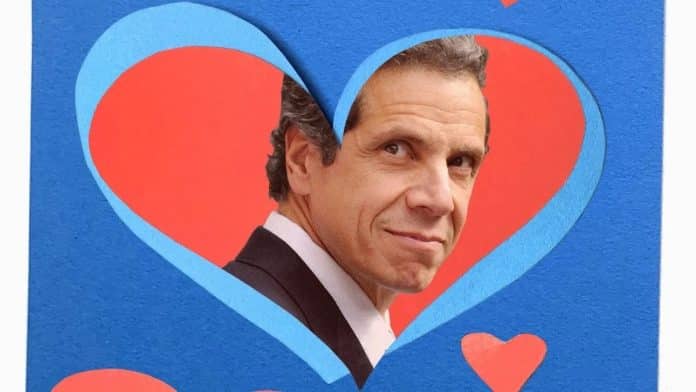 “Thank you for your different outfits, your tight white polo shirts, your forceful language, and your clear, easy-to-read graphics that are probably meant as a learning manual for Donald Trump.” Chelsea Handler wrote on the Mar. 31, ‘20 Vogue publication.

“Governor Cuomo, do you know how dehydrated we’ve been?” Handler continued.

“Thank you, Andrew Cuomo. Thank you for reminding us that there are men who can lead and be clear and tell the truth—even when the news is bad. Who practice benevolent ruthlessness.”

A video showing Gov. Andrew Cuomo challenging a female journalist to “eat the whole sausage” in front of him at the 2016 New York State Fair has resurfaced on social media, the New York Post reported.

“I want to see you eat the whole sausage,” the Democratic governor is heard telling then-NewsChannel 9 reporter Beth Cefalu, as his daughter Michaela sits quietly next to him, according to the video shared by journalist Matt Binder.

“There’s too much sausage in that picture,” Cuomo says in the cringeworthy exchange, prompting laughter from other diners.

Just 24 hours after the second sexual harassment allegation broke — Cuomo said Sunday evening that he now realizes that what he perceived as “playful” banter in the office could have been have been “misinterpreted as an unwanted flirtation.”

“The last thing I would ever have wanted was to make her feel any of the things that are being reported,” Cuomo said, saying that “she came to me and opened up about being a sexual assault survivor” and that “I tried to be supportive and helpful.”