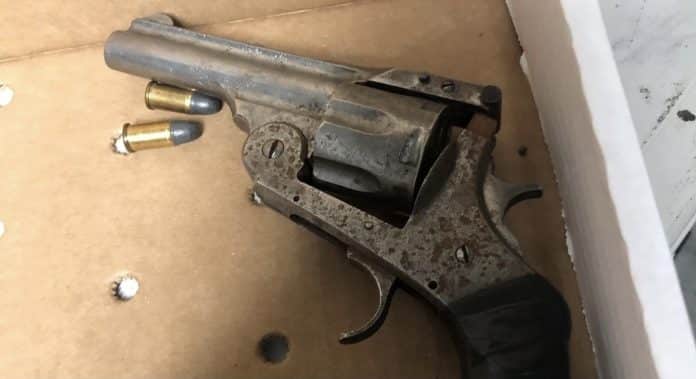 A Chester man is behind bars after police say they found a pistol loaded with three rounds on him Sunday night, Your Content has learned.

Police officers were dispatched to the area of the 1800 block of Edgmont Avenue for a subject in possession of drugs in the city of Chester, Pennsylvania.

The suspicious figure was described as a black male wearing a black jacket and tan hat.

Upon entering the area, Ofc. Mark Crawford observed a male known to him as Monir Green matching the description and standing in the 2000 block of Edgmont Avenue.

A pat down was conducted at which time officers recovered a silver handgun loaded with three rounds of ammunition from the jacket pocket of Green.

Green was taken into custody and a search incident to arrest revealed twelve blue baggies containing suspected heroin in the front left pocket of Green.

Once back at headquarters, it was discovered that Green was currently out on $75,000 unsecured bail for assault and theft offenses from an incident that occurred on Thursday April 8, 2021.

A further check of Green revealed that he is a convicted felon prohibiting him from possessing a firearm. Green was charged with drug and firearm offenses and arraigned by District Justice Kelly A. Micozzie-Aguirre.

Green’s bail was set at 10% of $250,000 at which time he was committed to George W. Hill Correctional Facility where he will await a preliminary hearing scheduled for April 26, 2021.