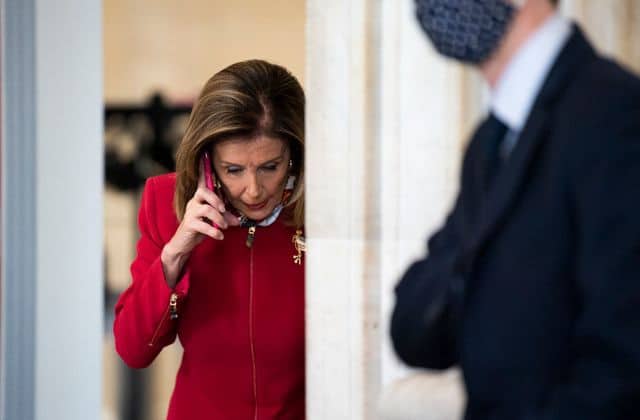 Federal agents fumbled a search warrant as they journeyed to Alaska in search of Nancy Pelosi’s stolen laptop, and Your Content has learned agents ‘mistook’ the identity of the homeowners.

Marilyn and Paul Hueper took to social media on Apr. 12 and said at-least twelve agents from the Federal Bureau of Investigation broke into their home.

Amid the morning mayhem, the agents handcuffed the two for an impromptu interrogation.

According to the homeowners, the FBI: “Interrogated us, searched the house, and left with my phones and laptops,” she wrote in the April 29th post.

“The FBI said they were looking for Nancy Pelosi’s laptop! So I guess that answers one question.

“It really did get stolen and is still at large. […] They tried to get me to admit that I had been in the Capital building on Jan 6th, which I hadn’t, and threatened to arrest me for obstruction of justice if I didn’t give them the answers they wanted,” she added.

“Good lord. I didn’t realize that asshole and FBI were synonyms,” Pattis told Your Content. “Sounds like a great lawsuit—I hope they call me.”

As Your Content exclusively reported on Jan. 8, Nancy Pelosi was ‘mortified’ after masked men are said to have snatched her laptop amid the chaotic scene at the U.S. Capitol on Jan. 6.

A Congressional aide to House Democratic Speaker Nancy Pelosi previously said that a laptop was stolen from her office during the storming of the U.S. Capitol amid the chaos.

“Speaker Pelosi appeared absolutely mortified after an assistant told her the laptop was missing,” an aide to a Democratic colleague of Pelosi previously told Your Content. “She doesn’t want to be the next Hillary.”

Marilyn Hueper attributed the raid to a case of mistaken identity, pointing out several distinctions between her physical appearance and the lady believed to have snatched Nancy Pelosi’s ‘unimportant’ laptop, revealed The National Pulse

What’s more, the antagonistic agents confiscated a copy of the Declaration of Independence, the homeowners revealed to The Pulse.

Marilyn hopes the woman of interest will soon be found—noting the mystery woman is ‘looking a lot better’ than the homeowner as agents executed the tainted warrant.

“Not a bad looking chick, and lookin a lot better than I was this morning when they drug me out of bed to hand cuff me. But that sweater… ugh!

“Anyone know who she is?”

To make matters more confusing, on Jan. 18 Your Content readers were first to know that the girl who is said to have snatched Pelosi’s laptop was arrested in Pennsylvania. But the fumbled warrant indicates prosecutors have yet to find the actual laptop.

Riley June Williams, 22, was charged with disorderly conduct on Capitol grounds with the intent to disturb a session of Congress and other charges after her former flame turned her in, NBC 10 was first to reveal.

The agent’s affidavit said a cellphone video that was likely shot by Williams shows a man’s gloved hand lifting an HP laptop from a table, and the caption read, “they got the laptop.”

Pelosi’s deputy chief of staff, Drew Hammill, claimed the laptop was used only for presentations before being snatched from a conference room.