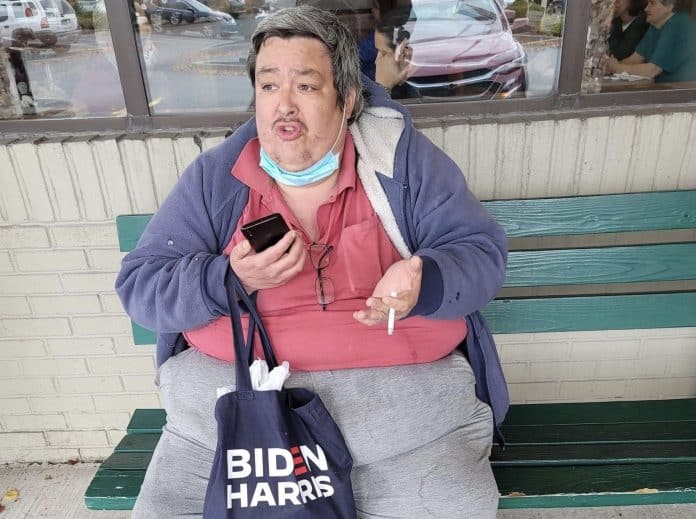 Police throughout Pennsylvania are on high alert for a man accused of theft of services, and it is believed the man is a staunch supporter of President Joe Biden, Your Content has learned, though his political passion has no relevance to the warrant.

The search is on for Kevin Fitzpatrick Jr., 49, of Ashley, Pennsylvania after police say he unlawfully arranged for deceptive dealings, court documents indicate.

The individual in question is described as a 5’09” 390 pound man who resided in an apartment complex at 9 Hazeleton Street.

“If you see or know this individual or their whereabouts do not approach or attempt to apprehend them.” Wilkes-Barre Township Police Department wrote on Facebook Monday.

“Anyone who wishes to share information related to the location of anyone featured on this page with a Warrant should call 9-1-1 or privately message us on Facebook. All tips will remain anonymous. Post & Photo will be removed upon apprehension.”

Fitzpatrick Jr., captured in the above photograph divulging information on speakerphone as he puffed a cigarette, went viral after police sought the public’s assistance in locating the fugitive.

“When I get older I can only pray to be in that good of shape,” Mark Spittel joked in the Facebook comments section.

To make matters absolutely worse for finessing Fitzpatrick, an eye witness says she saw him pose for the photo outside of Perkins.

“That picture was at Perkins a few months ago.” declared Sharon Mros. “I remember him being there.”

One Facebook user slipped a wisecrack of his own in: “He couldn’t have gotten too far.” wrote Jonathan Mazeika.

“I’m sure wherever he is, he is out of breath.”

Police added any wanted persons wishing to turn themselves in will be recommended to be released on their own recognizance, or unsecured bail.

All suspects are innocent until proven guilty in a court of law.