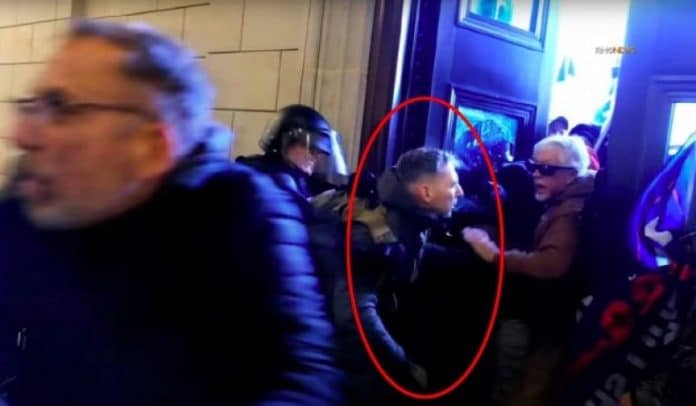 A Marine Corps officer became the first active-duty service member charged for his role in the January 6 Capitol Hill demonstration, Your Content is learning.

Maj. Christopher Warnagiris, 40, who is stationed at the Marine Corps Base in Quantico, Virginia, was arrested Thursday and charged with assaulting, resisting, or impeding certain officers or employees, obstruction of law enforcement during civil disorder, obstruction of justice/Congress, knowingly entering or remaining in any restricted building or grounds without lawful authority and violent entry and disorderly conduct on Capitol grounds, American Military News was first to report.

Warnagiris can be seen in video footage pushing a Capitol Police officer while he was attempting to close the door to the Capitol, pushing through a line of guards blocking the building’s East Rotunda doors, the Department of Justice announced Thursday.

“Once inside, Warnagiris positioned himself in the corner of the doorway, using his body to keep the door open and pull others inside. When a U.S. Capitol Police (USCP) officer tried to pull the doors shut, Warnagiris refused and continued pushing it open,” the department stated.

He faces a maximum possible sentence of 20 years in prison if convicted of the charges, which will be prosecuted in federal court in Washington, reports CNBC.

He will make his initial court appearance Thursday afternoon in U.S. District Court for the Eastern District of Virginia.