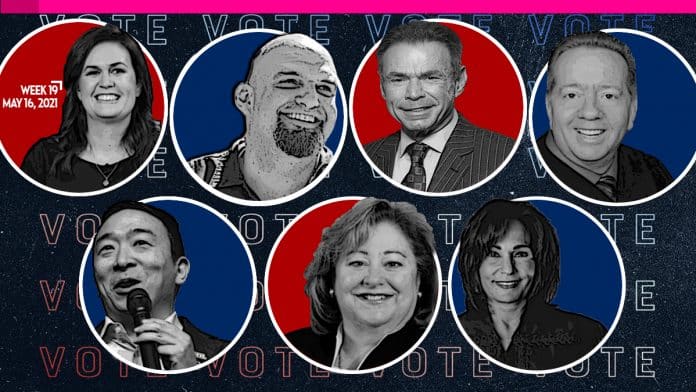 Your Content has officially endorsed candidates in Pennsylvania, New York, Arkansas, Virginia, Texas, and California amid the upcoming elections.

Our endorsement process differs from many of our competitors as we strive to have zero contact with the candidates on the list. When deciding which candidate was best fit, our editors scoured social media, voting records, public records and the candidate’s morals. Your Content readers have consistently rooted for the underdogs, and it’s our time to help them shine.

The following endorsements are for the candidates in pivotal regions we think are best equipped to take the nation forward.

JOHN FETTERMAN is the 34th lieutenant governor of Pennsylvania. He was elected on November 6, 2018, and assumed office on January 15, 2019, according to his Ballotpedia page. Fetterman supported legalizing marijuana before it was popular, officiated a same-sex marriage before it was legal, and pushed for single payer healthcare long before it was mainstream.

A. CHARLES PERUTO, Jr., was voted Super Lawyer, by his peers, in all areas of Criminal Defense for 14 consecutive years. For over 40 years, A. Charles Peruto, Jr. has distinguished himself in all areas of the law, but perhaps is best known for criminal defense as can been seen from his past publicity.

DEBORAH TRUSCELLO is the sole lifelong Delaware County resident on the ballot this upcoming election. When Deborah served as Magistrate for 8 years, she covered Folcroft, Tinicum, and the Philadelphia International Airport, handling 7,000 to 10,000 thousand cases per year with firmness and compassion.

MARIA MCLAUGHLIN is a lifelong resident of Pennsylvania, first in her family to attend college, single mom, lawyer, judge and appellate judge, Maria McLaughlin personifies the meaning of hard work. Throughout her legal career, Judge McLaughlin has dedicated numerous hours off the bench to various organizations, including, anti-violence, anti-drug, re-entry programs and youth organizations. She spent time working with women in prisons, helping them hone their interview skills so they might increase their chances of success outside the prison system.

CHRISTOPHER R. MATTOX has served the citizens of Delaware County for over seventeen years as a district judge. Judge Mattox proved the establishment wrong in 2015 after they had claimed he couldn’t win re-election due to the tense political climate. Judge Mattox has kept politics away from his courtroom and has no known ties to party leaders.

DAVID HAMILTON LANG is a judge for the Delaware County Magisterial District in Pennsylvania. David Hamilton Lang won the general election on November 3, 2015. Judge Lang has kept politics away from his courtroom and has no known ties to party leaders.

GEORGE DAWSON is a reputable attorney who remains active in his community, serving as a School Board Director for the Ridley School District, a position he was first elected to in 2006. As the Director, George works to establish education goals for the approximately 5,800 district students and oversees the districts’ 850 employees and its budget of approximately $100 million. George is also a former youth basketball and football coach and served on the Delaware County Heroin Task Force.

NICOLE THOMPSON has seen what happens to people and families after a member is sentenced to incarceration first-hand, having more than 16 years in law practice, Nicole is well-equipped to provide common sense resolutions to cases and make sound court rulings and decisions.

KEVIN MADDEN is running for his second term on the Delaware County Council.  When he spoke to the Haverford Democrats on February 1, he admitted that the past four years were “challenging.”  Being the first outsider elected in council, in the first two years, he and Brian Zidek were the minority voices on an entrenched, poorly managed ‘Republican’ council.

JOSHUA BROWN is a proven internationally-recognized law enforcement expert, black business owner, and Delaware County resident of over 20 years. While living in Nether Providence, Joshua has worked with law enforcement locally and across the globe to stop violent offenders, drug dealers, and escaped criminals.

MICHAEL MOLINARO has served Marple Township for over twenty years and helped shape Marple Township’s vast change in the manner of governing our township. The current commissioners have demonstrated the professionalism, ability and efficiency to implement the necessary policies and procedures to make Marple a first class township with first class services.

MARTY FLYNN was born and raised in Scranton, graduated from Marywood University, served as a Lackawanna County Prison education coordinator, and now represents his hometown of Scranton in the Pennsylvania State House. He’s spent eight years as one of the highest-ranked Representatives for helping his constituents, and Marty’s community wins when he’s in Harrisburg fighting for them. Now he wants to take that fight to the State Senate where he can be an even louder voice for his larger community.

CHRIS GEBHARD has never run for elected office. Chris owns a small business, Hoaster Gebhard & Company, in Lebanon, PA. Since Chris is not a career politician, his only interest in going to the State Senate is to make life better for our families.

ABBY MAJOR, a veteran who served in Iraq and Chief of Staff to Jeff Pyle, is running to guarantee rural residents continue to have a strong voice in the State House by ensuring our election process is fair for all voters, enabling working families and seniors to keep more of their money and standing up for our conservative values in Harrisburg and here at home.

ANDREW YANG locked down way more loyal supporters than any of the other candidates in the mid-tier of polling during the 2020 election, making it clear he’d change the political realm if elected to serve New York City.

SARAH HUCKABEE SANDERS served as White House Press Secretary for President Donald J. Trump from 2017 to 2019. A trusted confidant of the President, Sarah advised him on everything from press and communications strategy to personnel and policy. In 2007 and 2008, Sarah helped lead her father, former Arkansas Governor Mike Huckabee, to victory in the Iowa Caucuses and seven other states as his national political director.

Glenn Youngkin for Governor of Virginia

GLENN YOUNGKIN is a homegrown Virginian who grew up in Richmond and Virginia Beach. As his father changed jobs, Glenn learned that moving around didn’t equal moving up – nothing was handed to him. From his first job washing dishes and frying eggs at a diner in Virginia Beach, Glenn embraced hard work and responsibility to help his family when his father lost his job. His determination to succeed earned him multiple high school basketball honors in Virginia and an athletic scholarship to college

Mattie Parker for Mayor of Fort Worth

MATTIE PARKER spent five years as Chief of Staff for the Fort Worth Mayor and City Council where she led successful efforts to improve efficiency at City Hall. She serves on the board of directors for The Gatehouse’s Legacy Early Learning Academy, Read Fort Worth, Operation Progress – Fort Worth, and ACH Child and Family Services.

Caitlyn Jenner for Governor of California

CAITLYN JENNER is ready to put California and its massive government on a different path. Calling Cali home for nearly fifty years, Caitlyn journeyed to the West Coast to turn dreams into reality. With more than two hundred regulatory agencies and nearly 400,000 individual regulations, California is the most regulated state in the nation.