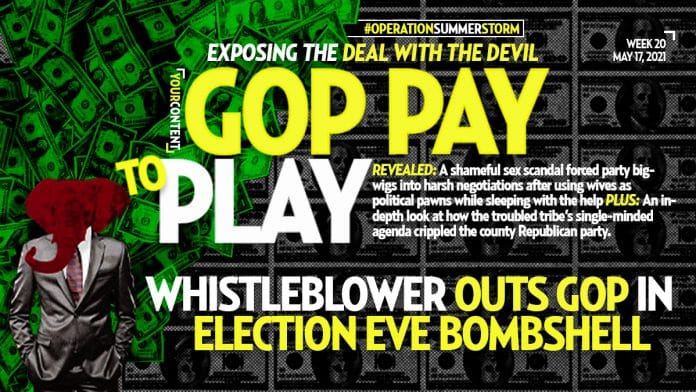 Leaders of the Delaware County Republican Party partook in a political pay-to-play scandal that led to an extra marital affair and catastrophic divorce—leaving taxpayers in limbo and conservative constituents on the back burner, a whistleblower previously employed by the local Republican chapter revealed to Your Content in an exclusive interview.

Your Content can reveal that for the past several years, Michael Puppio, a secretive Republican big wig, two-timed his county judge wife Andrea Puppio with a member of the campaign help who was sixteen years younger than his wife, despite sharing two children and running on a principal of a living a holistic lifestyle.

In 2016, while campaigning for his wife to serve as a magisterial district judge, Michael Puppio, 54, a self-described “family man,” carried on an extramarital affair in a campaign office for then-presidential candidate Donald J. Trump on the 1000 block of Baltimore Pike in Springfield Township, sources familiar with the situation told Your Content.

“Michael Puppio has been having an affair for a very long time,” the whistleblower told Your Content under the condition of anonymity in fear of retaliation or retribution. “Caitlin was able to expense stuff under multiple campaigns because of her fling with Puppio. You see her name on every expense report.”

In addition to taking on campaign tasks, Puppio’s mistress, then 30-years-old, worked full-time as Congressman Meehan’s District Director, sharing an office with the Puppio campaign, then-presidential candidate Donald J. Trump’s campaign and among others.

But when the local democrats shifted the political field from beneath Puppio and McGarrigle’s hands on Nov. 9, 2019, Puppio’s nightmare worsened: His wife found out about the affair and a “tough negotiation” between the couple ensued.

“Mike Puppio and Tom McGarrigle aren’t able to pull favors anymore, they really can’t. They have no power left at the courthouse, so they are scared,” said the whistleblower. “I would be scared.”

The unforeseen loss of power piled onto the divorce, forcing the party boss into making empty promises which entailed “stuff, jobs and deals” with special interests and candidates.

One such promise was a judicial seat for a former county councilman and dear friend of the disgraced party boss to serve as a magisterial district judge in the district his soon-to-be ex-wife ditched after being nominated to serve on the Delaware County Court of Common Pleas.

Puppio’s now-ex wife, Andrea, served as a magisterial district judge in Springfield for 18 years. She was first appointed to the position by former Gov. Ed Rendell in December 2002 and she has been re-elected twice by local voters, Chaddsford Live previously reported in coverage surrounding her county judgeship appointment.

“Michael Culp, a good friend of Michael Puppio, got nominated because of Puppio and his wife splitting up; they sold their house the same month that she got appointed to the County seat and she became a district judge in 2002, so she would have had a year short of the 20-year pension,” continued the whistleblower. “So now she gets her 20 years, which is $100,000 more in her payout pension.”

“From what I understand, I think Andrea just wanted the job as part of their divorce so that she gets her pension, she’s taken care of, and she doesn’t have to deal with anybody anymore.

“I think they separated, sold their house and this was part of the agreement that he nominated her to the county-level.”

As Your Content readers know, Michael Culp served on the scandal-scarred County Council overseeing lucrative private prison contracts with his former colleagues; but now, the questionable political player has his eyes set on a judgeship in Springfield Township.

“Up until the day of the GOP nominating their people, Culp was going to be one of the candidates. He backed out because it’s believed he was offered this district job as soon as Puppio got his wife out of it and that they were waiting for the vacancy,” continued the whistleblower. “When the vacancy came up, Puppio would appoint his wife to the county judgeship, and Culp would get the district magistrate nomination.

“They knew they were going to lose the county seats. If he lost the county election and tried to run for the magistrate, it wouldn’t look good for him,” explained the whistleblower. “Her getting the nomination must’ve been an agreement as part of their separation privately.”

This stunning portrait of Puppio’s twisted double life flies in the face to his carefully crafted public image. Explaining the dynamics of local politics, the whistleblower said the power is split into districts within the county and allocated to “district leaders.”

“In the Delaware County Republican Party, it gets broken down into state legislative districts. They call them district leaders. So, Mike Puppio is the Republican party chair of Springfield, but he’s also the chair of the 165thDistrict.

“These are all divided up based on them winning all the time and them having the power of those towns. The way it’s supposed to be organized is Puppio would be the leader of Springfield, Marple and Morton and parts of Radnor. If anybody from one of those towns wants anything, they’re supposed to go through him.”

What’s more, the whistleblower says extraordinarily high contributions in increments ranging from $100,000 to $200,000, totaling $726,000, from then-Senator Dominic Pileggi, was used in a failed attempt to salvage his role as majority leader.

“What happened was they were so nervous that they were going to lose the seat, and if they lost the seat, Pileggi would have been out of majority leader because everybody would be pissed.” the whistleblower told Your Content. “That’s the influx of money in the beginning. Towards the beginning of October, the rumors in Harrisburg were that no matter what happened, Pileggi was out as majority leader.”

“Pileggi getting the judgeship was already decided. It’s just about the nomination, that he would be nominated for judge because he was out as a majority leader. It was really about trying to save his job as majority leader, and it didn’t work because he started throwing money all over the state at the time.”

During Culp’s short stint as a councilman, he says a lawsuit against opioid manufacturers that is playing out in Ohio federal courts was the highlight of his career.

“That was one of the things I was most proud of – to get out in front of that and to be at the forefront,” Culp told the Daily Times. “Unfortunately, we’re not going to be on council to see that come to fruition … Hopefully, we’re successful and that money can go towards helping the residents of Delaware County at least make a dent in the scourge.”

As Your Content previously reported on May 23, 2020, members of Delaware County Council devised a scheme to funnel over $200 million of taxpayer funds to an illegal trust formed with no public accountability or oversight, using the funds for their own enjoyment, court documents revealed.