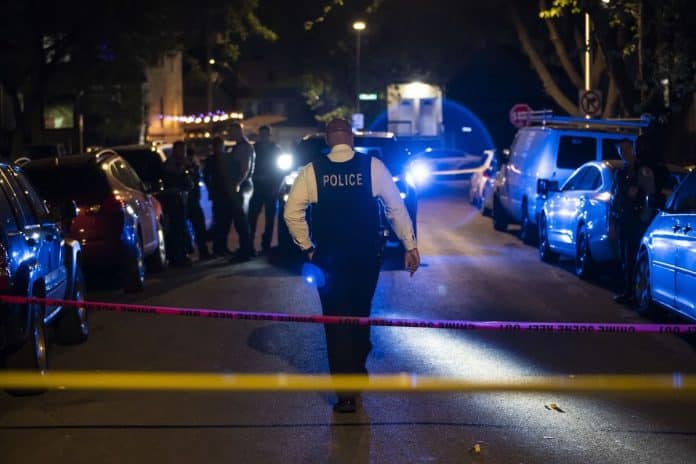 The city of Chicago was riddled in bullets over Memorial Day weekend, leaving 29 people shot and at-least two others dead, Your Content has learned.

In preparation for the historically violent weekend, the Chicago Police Department canceled days off and put officers on 12-hour shifts.

Meanwhile, community groups fanned out across the city to draw people out of the line of fire.

“This is our city that we love, and there is loss of life, and it should make us weep and roll up our sleeves,” said John Fuder of Chicagoland United in Prayer, whose group is sponsoring prayer marches across the city this weekend, reported the Chicago Sun-Times.

Shootings are up 36% this year compared to the same period in 2020, according to Sun-Times data.

Homicides are spiking in areas long afflicted with gun violence.

The first fatal shooting happened at 2:14 p.m. Saturday in the 3100 block of West Ogden Avenue in Lawndale, CBS Chicago reported.

Police said a man was in a vehicle headed northeast on Ogden Avenue when he was shot in the face and chest. The victim’s vehicle them hit a light pole and came to rest. He was taken to Mount Sinai Hospital, where he was pronounced dead. He was identified as Luis Poole.

According to the local CBS affiliate, in other incidents, the victims included a rideshare driver whose passenger tried to carjack him at gunpoint and a 12-year-old boy, each of whom suffered graze wounds in separate incidents.

Gunfire also rang out multiple times this weekend on the Dan Ryan Expressway.

On Saturday afternoon, a driver was shot and wounded on the Dan Ryan Expressway near 75th Street. Illinois State Police were called to the scene at 2:03 p.m. The driver who was shot was taken to an area hospital with non-life-threatening injuries.

Earlier, a gunfire incident shut down the Dan Ryan Expressway just before midnight Friday night. A car riddled with bullets slammed into a barrier near the 47th Street exit, and Illinois State Police found a bullet casing at the scene. No one was hurt, but the driver who was being shot at was arrested on charges of driving under the influence and various traffic violations.

The four were among 17 people shot Sunday and Monday morning. Previously, two men were killed and 10 others were injured in holiday weekend shootings from 3 p.m. Friday to late Saturday night.