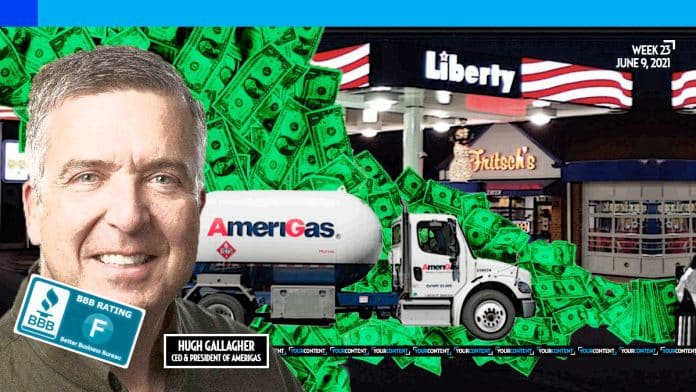 AmeriGas left mom-and-pop gas stations in suburban Philadelphia with zero propane after working with ‘their larger accounts’ only, Your Content has learned.

One lifelong business owner in Delaware County says their small-town gas station was left out in the cold by the propane company, forcing them to change suppliers for future orders.

“We finally have propane back in stock. AmeriGas without really letting us know has chosen to only service their larger accounts.” Fritsch’s Liberty Service Center wrote on Facebook. “They basically left us and our customers in the dark. We have a new supplier and are looking forward to working with them! Sorry for any inconvenience!”

Fritsch’s opened in Broomall back in 1950, providing kind service at a fair price. The station remains family owned and operated.

The Better Business Bureau reports more than 2,300 complaints were filed from people around the country against AmeriGas in the past three years. The company is not BBB accredited, but they do respond to customer complaints on the BBB’s website.

In general, the BBB says utility companies tend to get more complaints than other types of businesses because people rely on their utilities.

“You don’t think of a gas company as an emotional business, but when you think of what it provides to a person or their family, it is personal and it is emotional,” Renee Wikstrom with the BBB of Coastal Carolina previously told CBS 17. “If you get no response from the company, we encourage people to file complaints.”

A simple keyword search on Twitter for AmeriGas reveals thousands of similar complaints are lodged on a weekly basis against the propane company.

“I sincerely apologize for the issues you have experienced.” AmeriGas quipped in a generic response on Twitter Wednesday. “I ask that you email the below information and our customer service team will reach out to you.”

“AmeriGas left us all to die and is now charging fees. I am suing them for the negligence just like Murphy did to the nursing homes.”

Another woman scolded the professional propane hoarders for delivering a locked propane tank to their home with no key or method of accessing it.

“Shame on your company for leaving a family with a locked tank and no tech for over a week! When account gets closed you say oh I can’t refund your money for the delivery of a tank of propane that was LOCKED due to running out and the possibility of a leak.” Kathy tweeted, adding she would follow-up with a tweet if the company “makes it right.”

“All I asked was for an invoice (not yet paid) credit. Not to send me money back. I’m still waiting on responses from your teams. If they make it right I will also make sure to respond to this post stating that it was made right.“