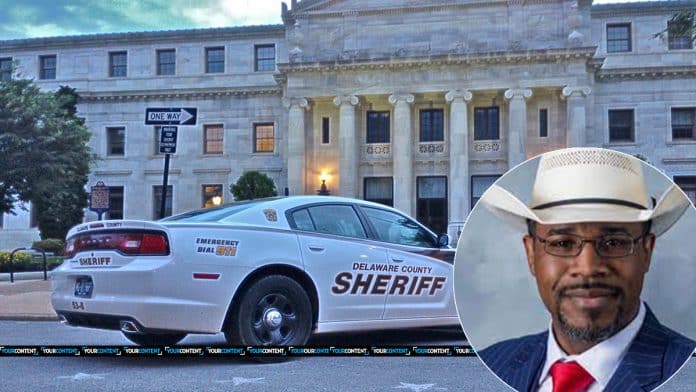 Joshua Brown bullied his way through more than one decade of impersonating a police officer — hiding the shameful secrets that he was a serial philanderer, alleged sexual deviant, pervert, and liar.

An explosive new government dossier has blown the lid off the secrets and scandals experts said torpedo the snooty lifelong dream of becoming sheriff, Your Content is first to report.

“The damning documents exposes Joshua as a controlling autocrat who believes it’s his way or the highway,” an insider at the Delaware County District Attorney’s Office told Your Content.

“It proves he is not fit to take the badge—and psychological and behavioral experts warn having Joshua in charge will spell the end of the local county sheriff’s department.”

The court documents give a chilling glimpse into the sordid personal life of the man considered to be the Republican front-runner for Delaware County Sheriff.

On Apr. 19, 2017, Nether Providence Police Department received a call from State Capitol Police who said Brown called the State Department and ‘threatened to shoot himself in the head.’

But when police responded to Brown’s Delaware County residence—they received a one-of-a-kind excuse for the threatening phone call: Brown claimed ISIS was behind the message.

“Received a call from the State Capitol Police, they had received a call from the above contact, at their State Department in which he threatened to shoot himself in the head,” the Apr. 19, ’17 police report reads. “I spoke to the contact, he advised me he was working with the FBI and Homeland on a project targeting ISIS and they hacked his phone and made the call,” Sgt. Robert Elmore continued. “But he was fine and he would call his FBI handler and let him know what was going on.”

A Sept. 18, 2015, report says a man’s bow and arrow malfunctioned, accidentally shooting off toward Brown’s backyard. The report directs officers exercise “caution” when interacting with Brown.

“Officers were dispatched to the area of 1xx Sharlow Dr. for a report of a subject with a bow and arrow. The actor was described as a white male carrying a bow and arrow, walking in and out of the back yards. The actor was located across from 1xx Sharlow Dr. as described and was identified as Kevin Pilgrim of 1xx Sharlow Dr.” Sgt. Patrick Fisher of the Nether Providence Police Department wrote on the Sept. 18, ’15, report. “Pilgrim advised he was shooting his compound hunting bow in his backyard when he accidentally loosed an arrow after striking himself in the face after a gear malfunction.

“The arrow went off target and landed in the rear yard of a neighboring residence.”

Pilgrim, who was uninjured, notified officers he had recovered the arrow and apologized, advising he ‘would cease all further activity.’

Officers noticed Brown standing nearby and wrote, ‘through prior contacts’ he is known ‘to always carry a firearm and have a concealed carry permit.’

Brown ‘confirmed verbally he was armed’ though no firearm ‘was visible nor displayed.’

“He was requested to keep his hands in plain view at his front.” Sgt. Fisher wrote. “When asked to do so, Brown replied ‘Whoa Brother… Same team.”

Police responded to Brown’s residence on Jul. 10, 2015, after he phoned them regarding a suspicious vehicle in his neighborhood. Brown claimed to be ‘concerned because he has high government clearance.

“Received a call for an attempted theft from a vehicle at [the] above address. On arrival spoke to the vehicle owner Joshua Brown.” Patrolman Brian Bonnes penned in the 2015 police report. “Brown does not believe anything was taken except for possibly his grandmothers handicap placard.

“Brown is concerned because he has high government clearance and since the governments computers were compromised a short time ago and his information may have been used.”

Police grew extremely suspicious after Brown journeyed to Nether Providence Police Department to divulge information about a large stockpile of guns and ammunition at his home, a report from the local police chief reveals.

“This subject came into the police department and was talking to me about a college project that he is currently researching for the American Military University that involved Unbanned Aerial Vehicles (UAV’s) and his military background.” Chief David Splain wrote on the Nov. 26, 2013, police report. “He identified himself as a Fugitive Recovery Agency that tracks down wanted persons and offered his services with tracking down any wanted persons.

“During the course of our conversation, he advised that he has 3 AR-15’s, 3000-5000 rounds of ammunition, SS-109 .556 cal Armor Piercing rounds all stored at his residence, located at 1xx Sharlow Drive, where he lives with his grandmother.

“The subject obviously has some type of mental deficiency.”

When Brown left the police station—Chief Splain immediately conducted a name search for the peculiar resident.

“After he left I checked our ALERT system and found several contacts, one of which he was alleged to have identified himself as a Nether Providence police officer. Subject does have a criminal history out of Louisiana and New Jersey.

“Any officer coming in contact with this subject, or residence is advised to use caution. A further investigation will be conducted regarding the alleged weapons at the residence.”

“The subject obviously has some type of mental deficiency.”

To make matters worse, Brown was under investigation for alleged sex crimes in at-least two states—including Pennsylvania and New Jersey—according to the documents obtained by Your Content.

According to the report, Detective Michael Erickson “received information forwarded by Delco CID in reference to an investigation conducted jointly by CID and the Rutgers University Police Department.”

“The allegation as reported by the victim is she met Brown while attending the University in early 10/2011, possibly 10/7/2011. Victim reported she engaged in consensual intercourse with Brown on that evening.” Det. Erickson wrote. “On 10/9/11, the victim reported she traveled to Brown’s home residence, 1xx Sharlow Dr. Wallingford, to engage in consensual intercourse with Brown ‘but only to a certain extent.’”

The report reveals Brown demanded the ‘victim to perform additional sexual acts which she denied’ and that’s when her nightmare worsened.

“Brown allegedly became irate and forced the victim to perform the requested acts, stating ‘that’s not my problem’ after being advised by the victim that she was fatigued. The victim reported she performed the requested sexual act and again engaged in consensual intercourse with Brown ‘in effort to appease him.’”

When the victim tried exiting Brown’s residence, he allegedly ‘prevented her from leaving his residence’ and began ‘kissing and biting her neck,’ the police file showcases.

“Victim reported after completion of the sexual acts with Brown she advised she wished to leave the residence. Victim reported Brown grabbed the victim by the arms in an attempt to prevent her from leaving his residence.” Det. Erickson’s Nov. 2011 report continues. “Victim reported brown then began kissing and biting her neck.

“Victim reported she was able to eventually break free, flee the residence and return back to Rutgers University.”

The report indicates the alleged victim immediately journeyed to Rutgers University Police to file a report but later noted she ‘did not wish to pursue the matter criminally’ in Pennsylvania because Brown allegedly claimed to be an active police officer for Nether Providence Township.

“The victim stated she ‘did not wish to pursue the matter criminally in PA, as it was her belief that Brown was a law enforcement official working within the town where he resides,’ Nether Providence Township.”

Delaware County Criminal Investigation Division Detective Lythgoe noted in the Nov. 2011 report that Brown was not “a police officer with the Nether Providence Township Police” or anywhere else in Pennsylvania.

A spokesperson for the Louisiana State Police said the agency is unable to provide any information pertaining to Brown when asked by Your Content about Brown’s status.

“We will not be able to provide any information on whether or not there is an active investigation.” Lt. Melissa Matey said.

On Nov. 6, 2005, police in Delaware County were in utter shock after receiving a bizarre phone call from a woman named ‘Sara’ who alleged she ‘met Josh Brown online’ on a sex swingers service and he had ‘been harassing her.’

“The fire chief was contacted by a female named ‘Sara.’” Sgt. Thomas Six wrote on the 2005 report. “She advised that [she] met Josh Brown online [at] swinglifestyle.com and had been to the fire house on several occasions and engaged in sexual conduct in the house.”

To prove the seriousness of the situation—Sara forwarded authorities “pictures showing her breasts in front of the fire truck.”

“The female forwarded pictures showing her exposing her breasts in front of the fire truck. The subject stated that Brown also has been harassing her.

“The chief advised her to contact the police to file a report.”

Board members of the involved fire company advised the local police department of the situation and notified “Brown that his membership with the fire company” would be terminated.

According to the New Jersey docket sheet, Brown was charged with burglary and aggravated criminal sexual contact on Feb. 24, 2005.