Man makes moves on flight attendant from Philly to Miami, gets duct taped to seat
M 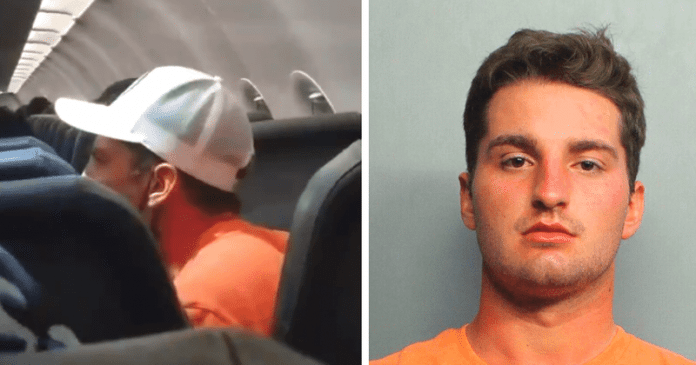 Police say that Maxwell Berry, 22, was sitting in seat 28D and had ordered two alcoholic beverages from a flight attendant. When he finished his drinks he ordered another drink and allegedly brushed his empty cup up against the flight attendant’s backside inappropriately.

The police report said Berry had two drinks while on the flight and ordered another drink.

The report said Berry brushed an empty cup against the backside of a flight attendant.

Berry then spilled his new drink on his shirt, went to the bathroom, and came out shirtless, the report said. A flight attendant helped him get another shirt from his carry-on.

After walking around for 15 minutes, the report said, Berry then groped the chests of female flight attendants, ABC7 revealed.

Police said he then punched a male flight attendant in the face who had been called over to watch him.

Another passenger who recorded Berry’s being duct-taped to his seat said he was “aggressive” and attacked the male flight attendant without warning.

“Help!” Berry screamed as the tape was being applied to his face, eliciting some jeers from others on the plane, the footage shows, the New York Post reported.

Frontier Airlines said a passenger made “inappropriate physical contact” with a flight attendant and assaulted another during the caught-on-camera incident.

“As a result, the passenger needed to be restrained until the flight landed in Miami and law enforcement arrived,” Frontier Airlines told WPLG in a statement. “The flight attendants will be, as required in such circumstances, relieved of flying pending completion of investigation of the events.”