The murderous man wanted in connection to a string of violence against cops and his ex-girlfriend was apprehended by police. 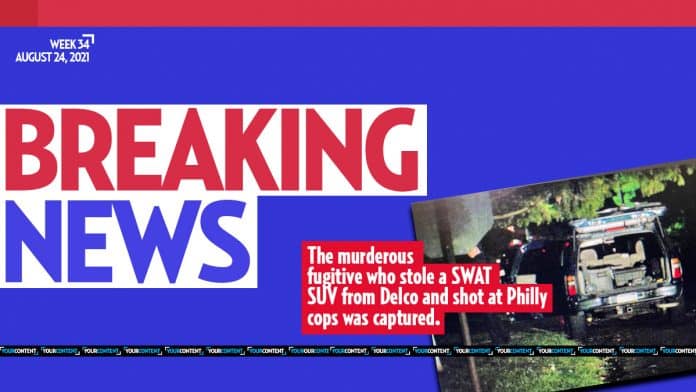 The murderous man wanted in connection to a string of shootings, stealing a SWAT SUV, and attempted murder of his girlfriend in Delaware County, was apprehended and shot by police officers in Deptford moments ago, and Your Content has learned the suspect is expected to survive the altercation.

“Got him, shot him” a law enforcement source close to the investigation told Your Content shortly after midnight. “An officer was shot by the perpetrator during the altercation.”

According to multiple well-placed sources, the suspect was shot and transported to Cooper Medical Center by Gloucester County EMS.

The gunfight happened in the area of Oak Avenue and County House Road in Deptford, a city in Gloucester County, New Jersey, shortly after 12:00 a.m. Tuesday.

A police officer was wounded in the altercation and transported to Kennedy Hospital in Washington Township. The officer’s condition is unknown at the moment—but sources say he’s expected to ‘be alright.’

__
This is a developing breaking news story. It will be updated momentarily. Stay with Your Content for an updated version as information becomes available.

Your Content readers exclusively learned the murderous man ‘maneuvered like an NFL running back’ during the tense situation that started in Delaware County early Monday evening.

“The suspect maneuvered like an NFL running back—he hopped in an unmarked vehicle and sped off with lights and sirens,” a law enforcement source involved in the pursuit told Your Content. When asked if the stolen police car was used in the pursuit, the officer provided a vague response.

“The stolen vehicle belongs to a police agency from Delaware County—the cop wasn’t there for supper,” said the source. “Nevertheless, the full force of the men and women of law enforcement is behind bringing this perpetrator to justice—and we will. It will be a quick and swift arrest.”

As Your Content readers know, police from multiple jurisdictions in Pennsylvania and South Jersey searched for the murderous man who fled from a traffic stop and shot at police after stealing their vehicle and making off with SWAT tactical gear.

The incident started around 7 p.m. in the small town of Folcroft in Delaware County, Pennsylvania when officers in attempted to pull the man riding a motorcycle over.

“There was a man who was not happy because of the bitter-end to a battered relationship where he attempted to kill his girlfriend, and the upcoming legal woes he faced,” a second law enforcement source conveyed to Your Content. “Then, he lashed out on police officers who were doing their job and turned a felony stop into a manhunt where he is considered armed and extremely dangerous.”