At-least one student has died after suffering from a gunshot wound at a high school football game Friday night in Delaware County. 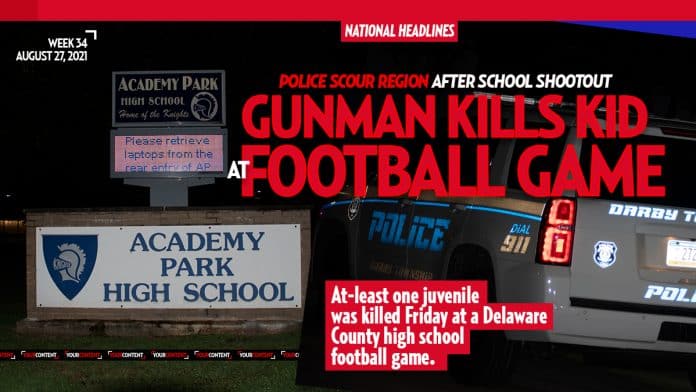 A 7-year-old girl died after being shot in the neck at a high school football game Friday night in Delaware County, Your Content can tragically report, and two other juveniles remain hospitalized in unknown condition.

As Your Content readers know, police responded to Academy Park High School shortly after 9 p.m. for reports of a drive-by shooting with multiple victims.

According to sources close to the investigation, there are multiple crime scenes established, including the area of the snack bar and nearby neighborhoods where stray bullets journeyed.

According to the well-placed source, gunfire traveled in the area of the snack bar just after 9 p.m. Friday.

The gunmen struck a total of three victims who were rushed nearby hospitals. Among them was a 7-year-old girl who was pronounced dead shortly thereafter.

The circumstances of the shooting were not immediately known.

According to the Academy Park High School sports schedule online, there was a football game there against Pennsbury H.S. scheduled for 7 p.m.

__
This is a developing breaking news story. It will be updated momentarily.

Trump confirmed in a statement Tuesday that General Mark Milley is a 'dumbass' and the 'failed leader' responsible for the Afghan crisis.