Police arrested an untalented graffiti vandal who allegedly frolicked across the county to vandalize local businesses. 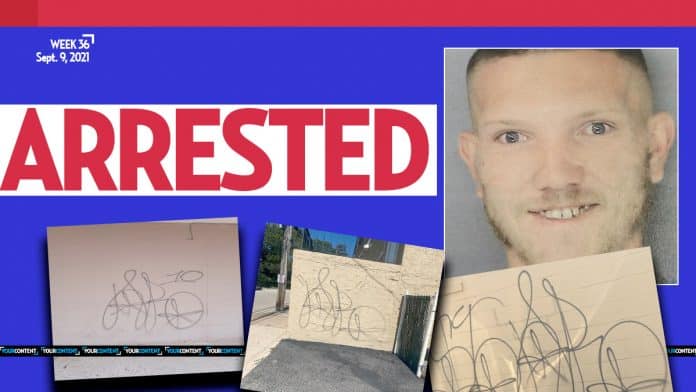 Police arrested an untalented graffiti vandal who allegedly frolicked across the county to vandalize local businesses, Your Content has learned. What’s more, the local police chief says the bandit vandalized a police car.

“Yesterday I told you that we were not going to tolerate idiotic behavior in our town.” Chief Dave Madonna of the Prospect Park Police Department declared Wednesday. “Today, I am happy to announce that an arrest was made in yesterday’s graffiti incident.”

The vandal, identified by police as 25-year-old Christopher Linn, was arrested and charged with several misdemeanors.

Chief Madonna added: “Thanks to the public,the Delco Probation Office, and other police agencies, we have placed Christopher Linn, 25, of Folcroft, under arrest for criminal mischief and related charges.”

According to Delaware County officials, Linn also earned an extra charge for damaging a police vehicle.

“A special thanks to Sgt Henry O’Neill and Officer Eric Hollenbach for working the case. When these officers and assisting Folcroft units found him in their town, Linn was wearing the same clothing as he was on the video.” Chief Madonna continued.

“Very happy with the quick, successful outcome. This is how policing should always work, the public and various agencies working together to solve a problem.”

Just two days ago Chief Madonna took to Facebook to seek the public’s assistance in identifying the clumsy vandal.

“Public’s help needed.” Chief Madonna wrote on Tuesday. “Please see attached photo. This is not going to be tolerated in Prospect Park. The male who is the subject of this investigation spray painted the side of a business on 11th Ave.

“We are currently seeking additional video.  Please help us to find him.”

In an attempt to locate the man—Chief Madonna added a personal note on the Facebook post in the event Linn was lurking on the social platform.

“If this is you in the picture call us and turn yourself in. You will be treated fairly.”

Residents in Delaware County are urged to notify their local law enforcement agency if they feel they’ve been victimized by Linn’s illegible graffiti.

If you believe you’ve been victimized, Chief Madonna says you can reach out to Prospect Park Police by calling 610-534-2222, or, you can DM the chief himself on Facebook.