Brian Laundrie was reported spotted in Baker, Florida, after FBI agents executed a search warrant at his home in connection to the murder of Gabby Petito. 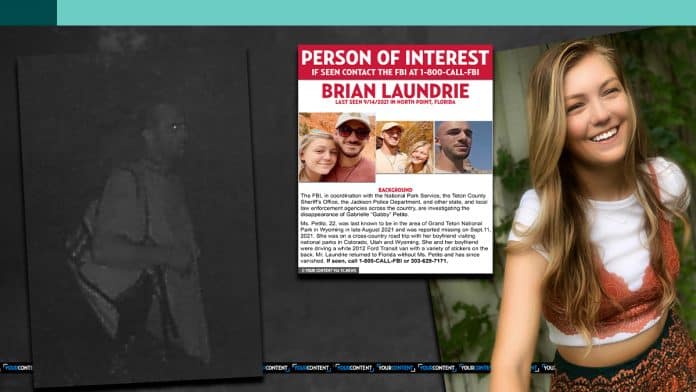 Brian Laundrie was reportedly spotted by a home motion camera journeying toward the Alabama border in Baker, Florida, Your Content has has learned. Authorities are investigating the spotting, the homeowner confirmed.

The spotting took place at 6:17 a.m. in Baker, Florida. According to a statement, federal agents executed a search warrant at the Laundrie residence Monday.

“The #FBI search at the Laundrie residence in North Port has concluded. No further details since this is an ongoing investigation. We continue to ask for the public’s assistance in the #GabbyPetito investigation.” FBI Denver tweeted.

The man resembles Laundrie and is carrying a backpack, a photo released by Sam Bass appears to depict.

The Laundrie family attorney, Steven Bertolino, canceled his press conference which was originally scheduled for Tuesday at 1 p.m. local time approximately one hour after Your Content reached out for comment Monday night.

The lawyer said that they made the decision after speaking with the FBI on Monday night, according to WABC reported Kristin Thomas.

Remains believed to belong to the 22-year-old ‘van-life’ influencer were found Sunday at the Spread Creek campground in Bridger-Teton National Forest on the eastern edge of the Grand Teton National Park in Wyoming, federal agents said.

The case gripped the nation after Laundrie drove the van they shared home to Florida alone September 1, and quickly hired a lawyer to evade police questioning.

As Your Content was first to report on Sept. 18, neighbors reached out to our newsroom and reported Brian was spotted in the area of his home hours before police arrived to take a ‘missing persons’ report from his parents.

Brian fled the area days before agents of the FBI swarmed his home, agents confirmed with Your Content.

“I’m not saying this is the guy but whoever was on my trail camera this morning in Baker, Fl strongly fits the description of Brian Laundrie,” Bass wrote on the Facebook post. “Authorities have been contacted but people in the North West Florida area be on the look out.