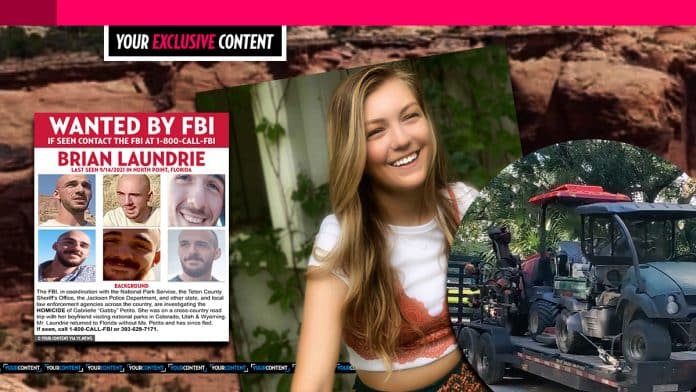 [Correction Notice: The landscapers place the Mustang at Myakka River State Park on Sept. 13, 2021, not Sept. 12, 2021, as previously reported. We apologize for the error.]

Four eye witnesses including three landscapers noticed Brian Laundrie’s Mustang nearby Myakka River State Park on Sept. 13 when they mowed around it, and Your Content has learned neither the FBI or North Port Police have made contact with the lawn keepers.

“It was backed in,” Chauncie told Your Content noting they had three lawnmowers at Myakka River State Park when they witnessed the lone Mustang on Sept. 13. “Well, we got these two mowers out here. I think we had, actually, a third mower. Three were out here.”

Chauncie pointed to a patch of overgrown grass: “It was parked right there.”

The landscaper said he recognized Laundrie but never saw him at the park. “I’ve seen him on the news. We definitely have not seen him.” Chauncie continued.

Chauncie’s colleague, Josh, told Your Content he too noticed the Mustang when they returned that Monday when it was ‘pouring rain’ forcing them to postpone it for a third time later that week.

“It was pouring down rain out here that day,” Josh said. “I got stuck on the trails that day.”

“We got stuck for, like, an hour-and-a-half” added Chauncie. “It was flooded so bad that we couldn’t mow half of it. But it rained a good two hours, hour-and-a-half, two hours.

“We ultimately finished it later that week to be honest with you. ‘Cause it wasn’t every Monday we’re out here, ’cause we usually cut this every two weeks.”

The witness noticed whoever placed the vehicle there did so in a peculiar manner making it blatantly noticeable and suspicious.

“The car was backed up as far back as possible without hitting the woods. Any further, it would’ve been up against the fence.”

According to Chauncie’s brother—who spoke under the condition of anonymity—also corroborated the story and noted the Sept. 13 crew consisted of three men, all of whom returned twice more that week to finish the job.

“My brother [was] on that mower and the other guy was with us. It was only us three. We’re usually the only three out here.” Chauncie’s brother said. “The car was parked right there, where the grass is still a little bit taller and I was the one cutting the grass that day, but I just mowed around it and there was nobody in it, ’cause I was hoping there would be so they could move it.”

What’s more, Daniel Mitchell phoned North Port Police to report the Mustang abandoned spoke to Your Content and verified the claims made by local landscapers.

“They mow every Monday night or Monday afternoon. So when I was leaving, the lawn people were getting here.” Mitchell told Your Content. “And when I came back in on Tuesday, I noticed the car was still there and I saw the grass was tall around it.”

Mitchell believes Brian Laundrie is either dead or has accomplices supplying him with food and water.

“If he doesn’t want to be found, he’s not gonna be found, you know. So what you have to do is, you have to find him when he’s not hiding.” Mitchell said. “And, I got to tell you, I think that he’s got people bringing him supplies.”

Mitchell frequently visits the park and told Your Content the Mustang was parked in an unusual way leading him to believe the driver wasn’t from the area and ‘doesn’t know the park.’

“I was down here when I saw the car here” Mitchell explained. “I thought well, maybe somebody is, doesn’t know the park and they parked there and then they went into… you know, I’ve seen people let their kids play in this creek.

“So when I was leaving, I saw the guys, the trucks with the lawnmowers coming in,” Mitchell said noting it was at approximately 4:30, 5:00 o’clock in the afternoon that Monday.

“Tuesday when I got back here about the same time, I tried to get here around this time.

“Tuesday, when I came back, the car was still there and I could see that they had mowed around it. I, yeah, I don’t believe a word that the parents are saying.” Mitchell declared. “Do you see this is what I was saying, I know this is where it was. Well, first of all I called it in, number one. Number two, you can see the grass is coming apart.”

Correction Notice: This post was updated October 15, 2021 at 9:01 p.m. to correct a previous claim that the Laundrie Mustang was seen at the park on September 12, 2021. The post was updated to reflect information confirming the landscapers witnessed the vehicle there on September 13, 2021. We apologize for the previous error by our transcription affiliate.

Your Content readers were first to learn that FBI agents zeroed in on naming their person-of-interest, Brian Laundrie, who came home alone after a cross-country trip-turned-tragedy that riveted the nation.