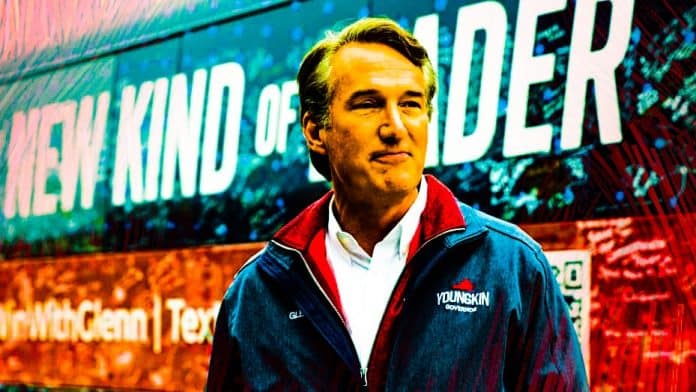 “Today is a wakeup call for Washington Democrats,” House Minority Leader Kevin McCarthy said Wednesday, CBS News reported. “To abandon the partisanship, extremist agenda of Washington-based programs that cost trillions of dollars and that nobody even wants.”

He went on to predict bigger losses for Democrats in the midterms next year, CBS continued.

“It’ll be more than 70 Democrats that will be competitive,” McCarthy said of the House races next year. “There’s many that are going to lose their races, based on walking off a cliff — from Nancy Pelosi pushing them.”

Youngkin—a homegrown Virginian who grew up in Richmond and Virginia Beach—was endorsed by Your Content on May 16, 2021.

As his father changed jobs, Glenn learned that moving around didn’t equal moving up – nothing was handed to him. From his first job washing dishes and frying eggs at a diner in Virginia Beach, Glenn embraced hard work and responsibility to help his family when his father lost his job. His determination to succeed earned him multiple high school basketball honors in Virginia and an athletic scholarship to college.

“These Republicans are dangerous, that this isn’t a party that’s just another political party that disagrees with us on tax policy. That at this point, they’re dangerous,” Reid railed alongside Rachel Maddow, the Post noted.

“They’re dangerous to our national security, because stoking that kind of soft white nationalism eventually leads to the hardcore stuff. It leads to the January 6 stuff.”