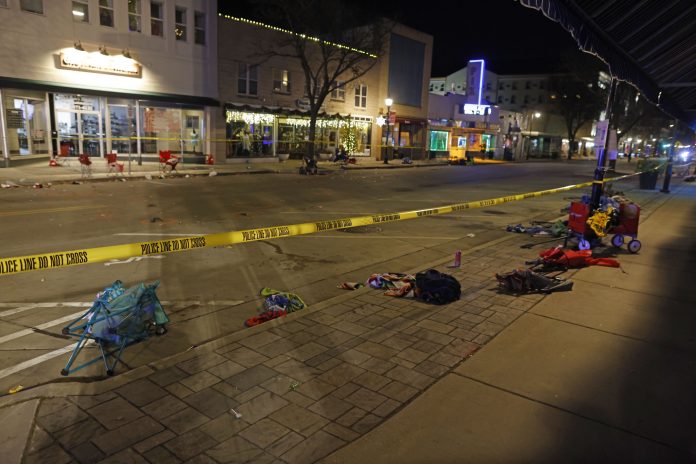 The amateur driver who plowed through crowds at a Waukesha Christmas Parade on Sunday night, killing five people and injuring dozens more, was on bail at the time after running over the mother of his child and punching her on November 2, Your Content has learned.

Darrell Brooks Jr., 39, was the driver of the red Ford SUV that plowed through crowds on Sunday at the parade.

Brooks was bailed out of jail on November 19 after posting a $1,000 cash bond on charges of battery, disorderly conduct, bail jumping and resisting an officer.

The charges relate to an incident on November 2 but it’s unclear what the details are; he was ordered to have no contact with a female victim afterwards.

Court records show he was charged on November 5, paid cash bond on the 11th but the records weren’t updated until the 19th.

On Sunday, he is believed to have plowed through crowds at 4.39pm in his red Ford SUV, killing five.

Police have not confirmed his motive but he may have been fleeing the scene of an earlier knife attack.

Among those killed were members of the Milwaukee Dancing Grannies, who perform at the parade every year.

Another 40 people were injured including twelve children—several people remain in the hospital.

Brooks’ criminal history dates back to 1999 and includes felonies and misdemeanors in different states.

It’s unclear why his bond was set so low when he was charged with two felonies on November 5th, bail jumping being one of them.

Darrell Brooks, 39, from Wisconsin, was identified as a person of interest taken into custody Sunday night and is being questioned, five law enforcement told NBC News.

Brooks has not been charged with any crime in connection with the incident and police have not named him a suspect.

The exact circumstances surrounding the incident and what may have motivated it were not yet clear.

He has a long rap sheet and a number of pending cases. Brooks’ most recent court appearance came on Nov. 5 for charges including reckless endangerment, battery, domestic abuse, resisting arrest and bail jumping. He was out on $1,000 bail for those charges at the time of the attack, FOX News reported.