By Your Content Staff
Modified 1 min ago
November 24, 2021
Featured 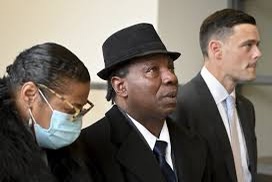 A man who was convicted of raping award-winning author Alice Sebold 40 years ago has been exonerated after a producer working on a Netflix adaptation of the writer’s memoir noticed inconsistencies in the story, hired a private investigator to look into it and then sent the case back to court, Your Content has learned.

Anthony Broadwater, 61, who spent 16 years behind bars, broke down in tears on Monday after being cleared.

Former US Marine was just 20 when he was convicted of rape which was basis of Sebold’s bestseller, Lucky.

‘I just hope and pray that maybe Ms. Sebold will come forward and say, ‘Hey, I made a grave mistake,’ he said.

‘I sympathize with her, but she was wrong,’ Broadwater added.

DA William Fitzpatrick said: ‘I’m not going to sully this proceeding by saying, ‘I’m sorry.’ That doesn’t cut it.

Broadwater was convicted of raping Sebold when she was a first-year student at Syracuse University in 1981.

She identified Broadwater in court, despite failing to identify him in a police lineup – picking out another man.

But it wasn’t until decades later that a producer working on Netflix adaptation became deeply concerned.

Tim Mucciante signed on as exec producer but dropped out and hired a private investigator to look at case,’ according to The Daily Mail.