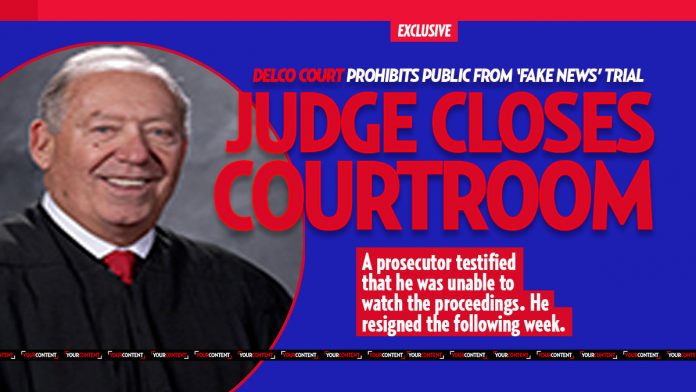 An ego-driven Delaware County judge is accused of official misconduct in an appeal filed by attorneys Bruce Castor and Norm Pattis alleging police established a crime scene—placing a uniformed officer and yellow tape outside of the courtroom to prevent the public from viewing the ‘fake news’ trial, Your Content has learned.

A chief prosecutor testified that authorities in the court complex he works for prevented him and the public from entering Nik Hatziefstathiou’s ‘fake news’ trial.

“I think it was just before 11 a.m. Tuesday, as you know, I like to watch trials.” said Chief Christopher Boggs of the Delaware County District Attorneys Office Special Victims Unit. “I have a lot of respect for Mr. Much and there were two senior deputy attorney generals, so I was interested in seeing what was going on.”

Boggs said a police officer stationed near the courtroom door stopped him from journeying toward the trial.

“There was a park policeman that I did not recognize. He was a taller gentleman with black hair and glasses,” Boggs explained. “He was wearing a mask. When I approached, I was surprised when he kind of put his hand up. He was like you can’t come further. I was like—I said I’m just using the bathroom and he’s like, okay. So, I went in the bathroom. I just washed my hands because I didn’t really have to go.”

The prosecutor said he was puzzled by the bizarre situation and identified himself as a county employee.

“I was just kind of surprised that he had stopped me. I kind of gathered my thoughts and went back out and I said, sir, I know you’re working. I’m not trying to give you a hard time. He kind of smiled under his mask. I said, it’s okay. You can, you know, ask me whatever you want, and I said, I’m a District Attorney here. I’m arguably—I’m not in the Attorney General’s office but arguably somewhat a party to the case. Am I not allowed to go in?

“And he said, his understanding was there were strict orders to not let anyone in.”

Norm Pattis, one of America’s most controversial trial attorneys, represented Hatziefstathiou throughout the four day trial and argued that the closed doors warranted a mistrial.

“In the hallway, I’ve noticed there’s a yellow security tape and a marshal and I’ve seen people turned away who wanted to use the restrooms.” Connecticut-based attorney Norm Pattis said. “I have concerns about my client’s Sixth Amendment right to a public trial.”

Judge John P. Capuzzi quipped to nearby staff: “Yeah, you want to ask the park police to move that yellow line, please?”

“I’ll go move the yellow line “outside?” asked the staffer. “Yeah, just move—yeah, just get rid of them. We don’t need them right now.”

But at 8:30 the next morning the tape remained in place with a guard stationed nearby, defense attorney Pattis told the judge.

“I note that the yellow tape is up again and there’s a marshal at the door or in the hallway and so I’m relying on—“ before being interrupted by Judge Capuzzi: “It’s not stopping people from coming in.”

“Well, I see a marshal. I see a yellow tape across the hall. I’m mindful of” Pattis began.

“I just want to make my record.” Pattis argued. “I’m not saying you’re doing anything. I just — the public — my client has a fundamental right to a public trial and we believe that it might be being abridged.”

Judge Capuzzi scolded the out-of-state attorney for asking about the unusual courtroom lockdown.

“Mr. Pattis—You know what? I don’t need a dissertation.” Judge Capuzzi said. “Have a seat. John, go out and ask them to move the yellow tape out front.”