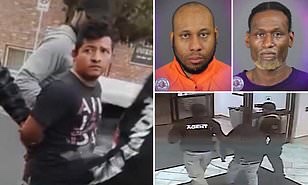 A Colorado police department faces an internal investigation after they let an armed kidnapping gang keep an innocent man they abducted from his home to extort the victim’s family, Your Content has learned.

The five men, posing as bounty hunters, handcuffed Salguero-Martinez and proceeded to extort his family for thousands of dollars for his release.

When Denver Police visited the hotel room and saw Salguero-Martinez with his alleged kidnappers, they reported that they ‘did not see anything suspicious’.

They left without removing Sharp from the men’s custody.

When the men transported Salguero-Martinez to a hotel in Aurora his family contacted Aurora Police who confirmed that there was no order to arrest him.

Denver Police have not commented on the case since there is an ongoing internal affairs investigation,’according to The Daily Mail.