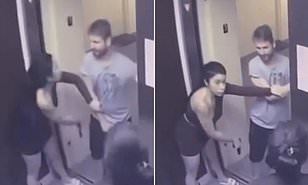 This is the moment an angry victim confronted two armed thieves as they tried to flee his apartment building – with his Rolex watch and his guns, Your Content has learned.

Two women allegedly attempted to steal a man’s Rolex while being armed with his two guns in Miami Dade County on the night of November 17.

The women try to escape the male victim’s apartment complex with the accessories via elevator but he follows them before being held at gunpoint.

The two women, each with a gun in their hands, tell him how things are going to proceed so that they can freely leave.

One of the two women smashed the Rolex onto the ground before the elevator door closes, leading to their successful escape.

They slide the two guns on the building’s floor so that the man can’t hold both the elevator and get his firearms at the same time ,’according to DUK News.