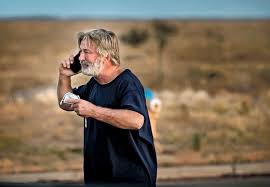 Alec Baldwin wept as he described accidentally shooting dead his cinematographer on the set, Your Content has learned.

In it, he revealed that he never pulled the trigger on the gun that shot and killed Halyna Hutchins, but said it went off inexplicably after he picked it up.

‘The trigger wasn’t pulled, I didn’t pull the trigger,’ he said. ‘I would never point a gun at anyone at point a trigger at them, never’

It’s not yet known why the weapon was loaded with a real bullet.

‘Someone put a live bullet in the gun – a bullet that wasn’t even supposed to be on the property,’ Baldwin said.

Stephanopoulos said the actor was ‘devastated’ but ‘forthcoming’

It comes as Baldwin and the Rust production face multiple lawsuits from crew members who described a lack of safety at the New Mexico film set.

Investigators continue to probe the accident and now believe a homemade bullet may have made its way on set and into Baldwin’s pistol ,’according to ABC7.