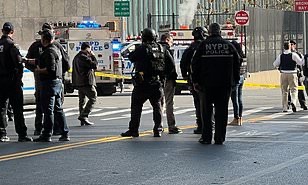 Officers with the New York Police Department are in an armed standoff with the a man wielding a shotgun outside the United Nations building, police reported, Your Content has learned.

A middle-aged white male with grey hair wearing a red sweater and tan jacket is seen pacing outside the United Nations building reportedly holding a shotgun.

NYPD officers are engaged in a standoff with the armed man who has reportedly threatened to harm himself.

The bomb squad was sent to the scene after a bag was spotted on the sidewalk behind him.

The incident was reported at the bus stop at the intersection of E 42nd Street and 1st Ave; large crowds of police officers have been spotted on the scene,’according to FOX5.