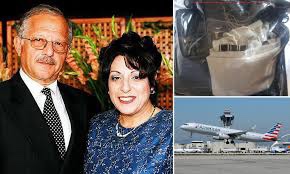 An elderly Jewish couple say they were kicked off an American Airlines flight and left stranded in Miami ahead of a hurricane after they refused to put their sacred Tallit prayer shawl on the floor under their seat, Your Content has learned.

Roberto and Elena Birman were flying from Miami to Newark on August 12.

The couple had few belongings with them, including a bag with a prayer shawl.

A flight attendant spotted it and asked them to put it under the seat, but they refused because it would be a ‘disgrace’ to their Orthodox Jewish religion.

They were kicked off the plane and sued; American Airlines says it’s ‘reviewing’ the lawsuit,’according to The New York Post.