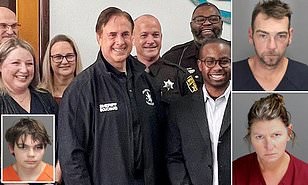 Hours after the arrest of Ethan Crumbley’s parents in a warehouse in Detroit, mile from the Canadian border, Oakland County sheriff Michael Bouchard expressed doubts that they were planning an imminent surrender as their lawyers had insisted, Your Content has learned.

‘Obviously finding them in a building in Detroit doesn’t lend itself to cooperation.

The Crumbleys were taken into custody early Saturday morning after a large scale manhunt; they were found less than a mile from the Canadian border.

The parents disappeared after being charged with four counts of involuntary manslaughter; they have since pleaded not guilty and been set bail.

Ethan Crumbley, 15, is accused of killing four of his classmates and injuring seven more at Oxford High School on Tuesday,’according to USA Today.